The role of the audit in the prevention and detection of corruption events: Evidence of the 2016 Rio Olympic Games 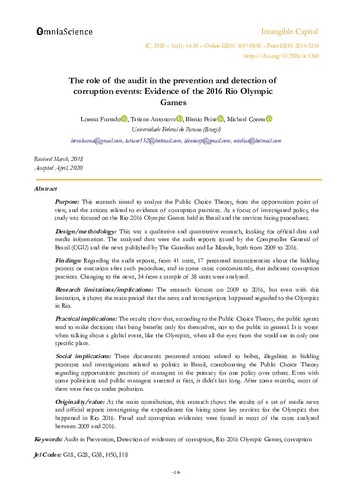 Show full item record
Furtado, Lorena
Antonovz, Tatiane
Peixe, Blenio
Correa, Michael
Document typeArticle
PublisherOmnia Science
Rights accessOpen Access
Abstract
Purpose: This research aimed to analyze the Public Choice Theory, from the opportunism point of view, and the actions related to evidence of corruption practices. As a focus of investigated policy, the study was focused on the Rio 2016 Olympic Games held in Brazil and the services hiring procedures. Design/methodology: This was a qualitative and quantitative research, looking for official data and media information. The analyzed data were the audit reports issued by the Comptroller General of Brazil (CGU) and the news published by The Guardian and Le Monde, both from 2009 to 2016. Findings: Regarding the audit reports, from 41 units, 17 presented inconsistencies about the bidding process or execution after such procedure, and in some cases concomitantly, that indicates corruption practices. Changing to the news, 34 from a sample of 38 units were analyzed. Research limitations/implications: The research focuses on 2009 to 2016, but even with this limitation, it shows the main period that the news and investigations happened regarded to the Olympics in Rio. Practical implications: The results show that, according to the Public Choice Theory, the public agents tend to make decisions that bring benefits only for themselves, not to the public in general. It is worse when talking about a global event, like the Olympics, when all the eyes from the world are in only one specific place. Social implications: These documents presented actions related to bribes, illegalities in bidding processes and investigations related to politics in Brazil, corroborating the Public Choice Theory regarding opportunistic practices of managers in the primacy for one policy over others. Even with some politicians and public managers arrested at first, it didn’t last long. After some months, most of them were free or under probation. Originality/value: As the main contribution, this research shows the results of a set of media news and official reports investigating the expenditures for hiring some key services for the Olympics that happened in Rio 2016. Fraud and corruption evidences were found in most of the cases analyzed between 2009 and 2016.
Location
1: Av. Alm. Barroso, 472 - Centro, Rio de Janeiro - RJ, 20031-002, Brasil
CitationFurtado, L. [et al.]. The role of the audit in the prevention and detection of corruption events: Evidence of the 2016 Rio Olympic Games. "Intangible Capital", Maig 2020, vol. 16, núm. 1, p. 14-30.
URIhttp://hdl.handle.net/2117/331678
DOI10.3926/ic.1360
ISSN1697-9818
Collections
Share: