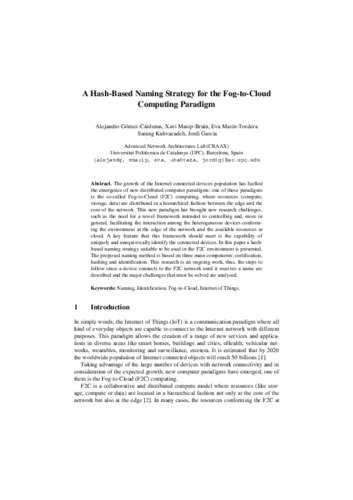 Document typeConference report
Rights accessOpen Access
All rights reserved. This work is protected by the corresponding intellectual and industrial property rights. Without prejudice to any existing legal exemptions, reproduction, distribution, public communication or transformation of this work are prohibited without permission of the copyright holder
Abstract
The growth of the Internet connected devices population has fuelled the emergence of new distributed computer paradigms; one of these paradigms is the so-called Fog-to-Cloud (F2C) computing, where resources (compute, storage, data) are distributed in a hierarchical fashion between the edge and the core of the network. This new paradigm has brought new research challenges, such as the need for a novel framework intended to controlling and, more in general, facilitating the interaction among the heterogeneous devices conforming the environment at the edge of the network and the available resources at cloud. A key feature that this framework should meet is the capability of uniquely and unequivocally identify the connected devices. In this paper a hashbased naming strategy suitable to be used in the F2C environment is presented. The proposed naming method is based on three main components: certification, hashing and identification. This research is an ongoing work, thus, the steps to follow since a device connects to the F2C network until it receives a name are described and the major challenges that must be solved are analyzed.
Description
© 2018 IEEE. Personal use of this material is permitted. Permission from IEEE must be obtained for all other uses, in any current or future media, including reprinting/republishing this material for advertising or promotional purposes, creating new collective works, for resale or redistribution to servers or lists, or reuse of any copyrighted component of this work in other works.
CitationGomez, A. [et al.]. A hash-based naming strategy for the fog-to-cloud computing paradigm. A: International European Conference on Parallel and Distributed Computing. "Euro-Par 2017: Parallel Processing Workshops, Euro-Par 2017 International Workshops: Santiago de Compostela, Spain, August 28-29, 2017: revised selected papers". 2018, p. 316-324. ISBN 978-3-319-75178-8. DOI 10.1007/978-3-319-75178-8_26.
URIhttp://hdl.handle.net/2117/331614
DOI10.1007/978-3-319-75178-8_26
ISBN978-3-319-75178-8
Publisher versionhttps://link.springer.com/chapter/10.1007/978-3-319-75178-8_26
Other identifiershttps://www.researchgate.net/publication/322984587_A_Hash-Based_Naming_Strategy_for_the_Fog-to-Cloud_Computing_Paradigm
Collections
Share: