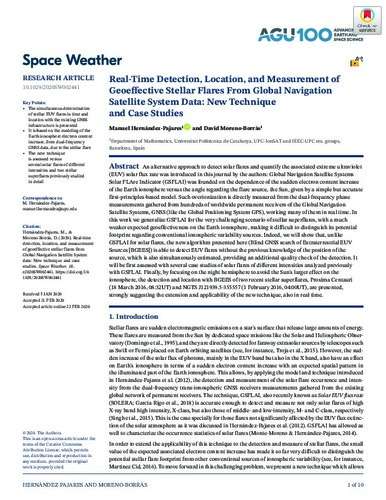 Moreno Borrás, David
Document typeArticle
Rights accessOpen Access
Abstract
An alternative approach to detect solar flares and quantify the associated extreme ultraviolet (EUV) solar flux rate was introduced in this journal by the authors: Global Navigation Satellite Systems Solar FLAre Indicator (GSFLAI) was founded on the dependence of the sudden electron content increase of the Earth ionosphere versus the angle regarding the flare source, the Sun, given by a simple but accurate first-principles-based model. Such overionization is directly measured from the dual-frequency phase measurements gathered from hundreds of worldwide permanent receivers of the Global Navigation Satellite Systems, GNSS (like the Global Positioning System GPS), working many of them in real time. In this work we generalize GSFLAI for the very challenging scenario of stellar superflares, with a much weaker expected geoeffectiveness on the Earth ionosphere, making it difficult to distinguish its potential footprint regarding conventional ionospheric variability sources. Indeed, we will show that, unlike GSFLAI for solar flares, the new algorithm presented here (Blind GNSS search of Extraterrestrial EUV Sources [BGEES]) is able to detect EUV flares without the previous knowledge of the position of the source, which is also simultaneously estimated, providing an additional quality check of the detection. It will be first assessed with several case studies of solar flares of different intensities analyzed previously with GSFLAI. Finally, by focusing on the night hemisphere to avoid the Sun's larger effect on the ionosphere, the detection and location with BGEES of two recent stellar superflares, Proxima Centauri (18 March 2016, 08:32UT) and NGTS J121939.5-355557 (1 February 2016, 04:00UT), are presented, strongly suggesting the extension and applicability of the new technique, also in real time.
CitationHernandez, M.; Moreno, D. Real-time detection, location, and measurement of geoeffective stellar flares from Global Navigation Satellite System Data: new technique and case studies. "SPACE WEATHER-THE INTERNATIONAL JOURNAL OF RESEARCH AND APPLICATIONS", 1 Març 2020, vol. 18, núm. 3, e2020SW002441.
URIhttp://hdl.handle.net/2117/331500
DOI10.1029/2020SW002441
ISSN1539-4956
Publisher versionhttps://agupubs.onlinelibrary.wiley.com/doi/full/10.1029/2020SW002441
Collections
Share: