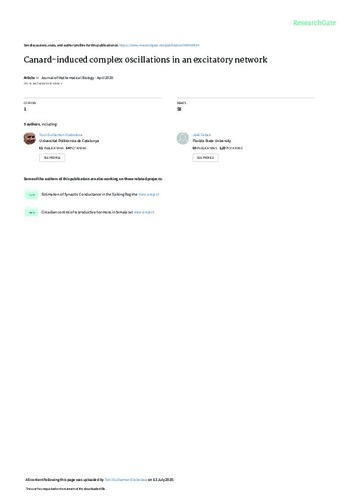 Rinzel, John
Köksal Ersöz, Elif
Tabak, Joël
Document typeArticle
Rights accessOpen Access
Abstract
In Neuroscience, mathematical modelling involving multiple spatial and temporal scales can unveil complex oscillatory activity such as excitable responses to an input current, subthreshold oscillations, spiking or bursting. While the number of slow and fast variables and the geometry of the system determine the type of the complex oscillations, canard structures define boundaries between them. In this study, we use geometric singular perturbation theory to identify and characterise boundaries between different dynamical regimes in multiple-timescale firing rate models of the developing spinal cord. These rate models are either three or four dimensional with state variables chosen within an overall group of two slow and two fast variables. The fast subsystem corresponds to a recurrent excitatory network with fast activity-dependent synaptic depression, and the slow variables represent the cell firing threshold and slow activity-dependent synaptic depression, respectively. We start by demonstrating canard-induced bursting and mixed-mode oscillations in two different three-dimensional rate models. Then, in the full four-dimensional model we show that a canard-mediated slow passage creates dynamics that combine these complex oscillations and give rise to mixed-mode bursting oscillations (MMBOs). We unveil complicated isolas along which MMBOs exist in parameter space. The profile of solutions along each isola undergoes canard-mediated transitions between the sub-threshold regime and the bursting regime; these explosive transitions change the number of oscillations in each regime. Finally, we relate the MMBO dynamics to experimental recordings and discuss their effects on the silent phases of bursting patterns as well as their potential role in creating subthreshold fluctuations that are often interpreted as noise. The mathematical framework used in this paper is relevant for modelling multiple timescale dynamics in excitable systems.
CitationDesroches, M. [et al.]. Canard-induced complex oscillations in an excitatory network. "Journal of mathematical biology", 1 Gener 2020, vol. 80, núm. 7, p. 2075-2107.
URIhttp://hdl.handle.net/2117/331497
DOI10.1007/s00285-020-01490-1
ISSN0303-6812
Publisher versionhttps://link.springer.com/article/10.1007/s00285-020-01490-1
Collections
Share: