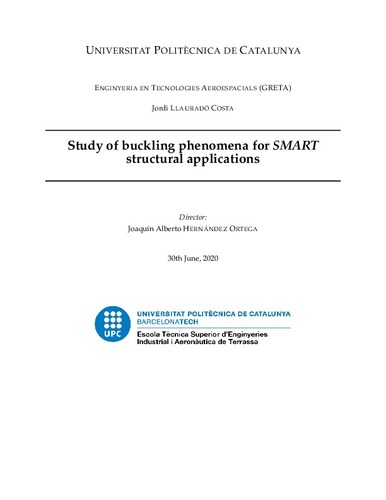 Except where otherwise noted, content on this work is licensed under a Creative Commons license : Attribution 3.0 Spain
Abstract
This project analyses the structural instability known as buckling, both from a displacement and energypoint of view. In order to do so, first of all, a time integration method is implemented and checked to beproperly functioning. Next, a mass-spring-damper model is modified to accurately represent the behaviourof a buckling system. This system is later on studied both using a displacement-controlled and a force-controlled analysis, as each one offers different outcomes. Besides, once these studies have been carriedout, an analysis of a chain of multiple springs will be performed, as it could represent the behaviour of amore complex structure such as shape memory alloys. The results obtained in this project coincide with theones expected, both in terms of energy dissipation and displacement. In the force-controlled analysis thesnap-through phenomena is shown, meanwhile the snap-back phenomena takes place in the displacement-controlled analysis. Besides, the chain of multiple springs does indeed represent the pseudoelasticity shownin the stress-strain diagram ofSMARTmaterials such as Nitinol. To sum up, it has been found that ratherthan being only avoided as it is an indicative of instability, the buckling phenomena and the post-bucklingbehaviour might actually have some useful applications.
SubjectsBuckling (Mechanics), Structural dynamics, Vinclament (Mecànica), Dinàmica estructural
ProvenancePer motius de confidencialitat el document original conté altre material no inclòs en aquest lloc web.
DegreeGRAU EN ENGINYERIA EN TECNOLOGIES AEROESPACIALS (Pla 2010)
URIhttp://hdl.handle.net/2117/331477
Collections
Share: