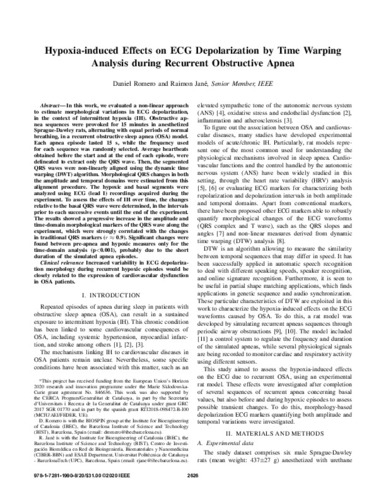 Document typeConference report
PublisherInstitute of Electrical and Electronics Engineers (IEEE)
Rights accessOpen Access
Abstract
this work, we evaluated a non-linear approach to estimate morphological variations in ECG depolarization, in the context of intermittent hypoxia (IH). Obstructive apnea sequences were provoked for 15 minutes in anesthetized Sprague-Dawley rats, alternating with equal periods of normal breathing, in a recurrent obstructive sleep apnea (OSA) model. Each apnea episode lasted 15 s, while the frequency used for each sequence was randomly selected. Average heartbeats obtained before the start and at the end of each episode, were delineated to extract only the QRS wave. Then, the segmented QRS waves were non-linearly aligned using the dynamic time warping (DWT) algorithm. Morphological QRS changes in both the amplitude and temporal domains were estimated from this alignment procedure. The hypoxic and basal segments were analyzed using ECG (lead I) recordings acquired during the experiment. To assess the effects of IH over time, the changes relative to the basal QRS wave were determined, in the intervals prior to each successive events until the end of the experiment. The results showed a progressive increase in the amplitude and time-domain morphological markers of the QRS wave along the experiment, which were strongly correlated with the changes in traditional QRS markers (r ˜ 0.9). Significant changes were found between pre-apnea and hypoxic measures only for the time-domain analysis (p<; 0.001), probably due to the short duration of the simulated apnea episodes. Clinical relevance Increased variability in ECG depolarization morphology during recurrent hypoxic episodes would be closely related to the expression of cardiovascular dysfunction in OSA patients.
CitationRomero, D.; Jane, R. Hypoxia-induced effects on ECG depolarization by time warping analysis during recurrent obstructive apnea. A: Annual International Conference of the IEEE Engineering in Medicine and Biology Society. "EMBC'20: 42nd Annual International Conferences of the IEEE Engineering in Medicine and Biology Society: 20-24 July 2020: Montreal, Canada". Institute of Electrical and Electronics Engineers (IEEE), 2020, p. 2626-2629. ISBN 978-1-7281-1991-5. DOI 10.1109/EMBC44109.2020.9176409.
URIhttp://hdl.handle.net/2117/331465
DOI10.1109/EMBC44109.2020.9176409
ISBN978-1-7281-1991-5
Publisher versionhttps://ieeexplore.ieee.org/document/9176409
Collections
Share: