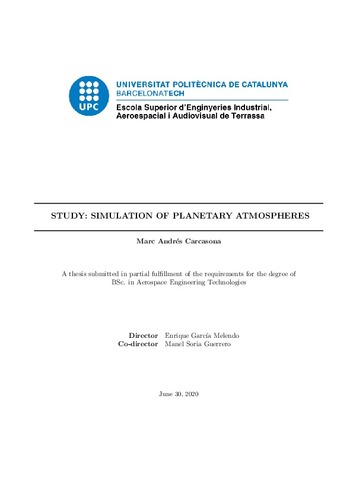 Document typeBachelor thesis
Rights accessOpen Access
Abstract
This thesis analyzes different ways of simulating planetary atmospheres to reproduce the observed phenomena and further understand its dynamics. To do so, a two dimensional Shallow Water model in ellipsoidal coordinates will be used in order to start capturing part of the dynamics that occur at large scales in the atmospheres of gas giant planets. Then, some additions will be done in order to control the instabilities that appear in the model, the possibility of simulating the poles will be presented and a new way of perturbing the system to achieve accurate steady-state vortices will be assessed. Then, a three dimensional Boussinesq model will be implemented to capture the convective movement of atmospheres in the radial direction. The results prove that the Shallow Water with the additions here presented is a very good option to reproduce with good accuracy the horizontal dynamics of planetary atmospheres, while the three dimensional model, at a smaller scale, is capable of reproducing the upwards movement of uid that the Shallow Water lacks. Both codes are capable of running in parallel computers improving the resolutions of the simulations carried out. Then, these codes might be used to further understand the dynamics of planetary atmospheres and complement the observational data available
SubjectsPlanets--Atmospheres--Computer simulation, Computational fluid dynamics, Planetes -- Atmòsferes -- Simulació per ordinador, Dinàmica de fluids computacional
URIhttp://hdl.handle.net/2117/331436
Collections
Share: