Study of the Lockheed SR-71 structure and reproduction of a 1:20 scale model 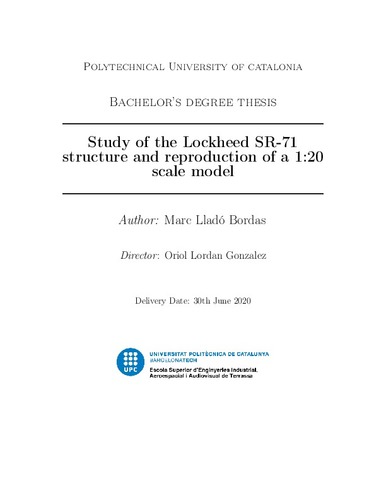 Document typeBachelor thesis
Rights accessOpen Access
Abstract
The Lockheed SR-71 was a strategic reconnaissance aircraft developed during the Cold War in the 60s, flown by NASA and the USAF. It is one of the most significant vehicles produced in the history of aviation, and a pioneer in the field of aerospace engineering, especially for its stealth technology and hypersonic capability. Due to its astonishing performance, even in today's standards (Mach 3+), and shape, the also called Blackbird is admired by many enthusiasts all over the world. This study has the objective to deepen in the airplane structure design, specifically for the SR-71. Then, through 3D CAD software, plans will be created to assemble a 1:20 scale model of the airframe.
SubjectsAirplanes, Military--Design and construction, Airplanes - Models, Three-dimensional imaging, Avions militars -- Disseny i construcció, Aeromodelisme, Imatgeria tridimensional
DegreeGRAU EN ENGINYERIA EN TECNOLOGIES AEROESPACIALS (Pla 2010)
URIhttp://hdl.handle.net/2117/331262
Collections
Share: