On the performance of QUIC over wireless mesh networks 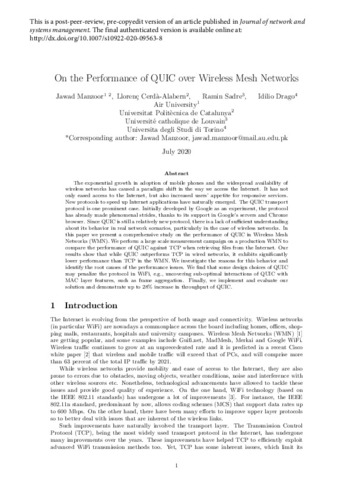 Sadre, Ramin
Drago, Idilio
Document typeArticle
Rights accessOpen Access
All rights reserved. This work is protected by the corresponding intellectual and industrial property rights. Without prejudice to any existing legal exemptions, reproduction, distribution, public communication or transformation of this work are prohibited without permission of the copyright holder
Abstract
The exponential growth in adoption of mobile phones and the widespread availability of wireless networks has caused a paradigm shift in the way we access the Internet. It has not only eased access to the Internet, but also increased users’ appetite for responsive services. New protocols to speed up Internet applications have naturally emerged. The QUIC transport protocol is one prominent case. Initially developed by Google as an experiment, the protocol has already made phenomenal strides, thanks to its support in Google’s servers and Chrome browser. Since QUIC is still a relatively new protocol, there is a lack of sufficient understanding about its behavior in real network scenarios, particularly in the case of wireless networks. In this paper we present a comprehensive study on the performance of QUIC in Wireless Mesh Networks (WMN). We perform a measurement campaign on a production WMN to compare the performance of QUIC against TCP when retrieving files from the Internet. Our results show that while QUIC outperforms TCP in wired networks, it exhibits significantly lower performance than TCP in the WMN. We investigate the reasons for this behavior and identify the root causes of the performance issues. We find that some design choices of QUIC may penalize the protocol in WiFi, e.g., uncovering sub-optimal interactions of QUIC with MAC layer features, such as frame aggregation. Finally, we implement and evaluate our solution and demonstrate up to 28% increase in throughput of QUIC.
CitationManzoor, J. [et al.]. On the performance of QUIC over wireless mesh networks. "Journal of network and systems management", Octubre 2020, vol. 28, p. 1872-1901.
URIhttp://hdl.handle.net/2117/331241
DOI10.1007/s10922-020-09563-8
ISSN1064-7570
Publisher versionhttps://link.springer.com/article/10.1007%2Fs10922-020-09563-8
Collections
Share: