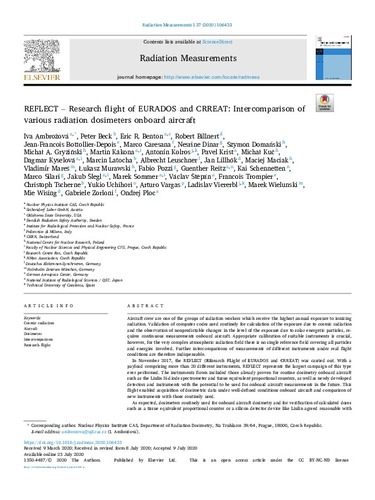 Document typeArticle
Rights accessOpen Access
Abstract
Aircraft crew are one of the groups of radiation workers which receive the highest annual exposure to ionizing radiation. Validation of computer codes used routinely for calculation of the exposure due to cosmic radiation and the observation of nonpredictable changes in the level of the exposure due to solar energetic particles, requires continuous measurements onboard aircraft. Appropriate calibration of suitable instruments is crucial, however, for the very complex atmospheric radiation field there is no single reference field covering all particles and energies involved. Further intercomparisons of measurements of different instruments under real flight conditions are therefore indispensable. In November 2017, the REFLECT (REsearch FLight of EURADOS and CRREAT) was carried out. With a payload comprising more than 20 different instruments, REFLECT represents the largest campaign of this type ever performed. The instruments flown included those already proven for routine dosimetry onboard aircraft such as the Liulin Si-diode spectrometer and tissue equivalent proportional counters, as well as newly developed detectors and instruments with the potential to be used for onboard aircraft measurements in the future. This flight enabled acquisition of dosimetric data under well-defined conditions onboard aircraft and comparison of new instruments with those routinely used. As expected, dosimeters routinely used for onboard aircraft dosimetry and for verification of calculated doses such as a tissue equivalent proportional counter or a silicon detector device like Liulin agreed reasonable with each other as well as with model calculations. Conventional neutron rem counters underestimated neutron ambient dose equivalent, while extended-range neutron rem counters provided results comparable to routinely used instruments. Although the responses of some instruments, not primarily intended for the use in a very complex mixed radiation field such as onboard aircraft, were as somehow expected to be different, the verification of their suitability was one of the objectives of the REFLECT. This campaign comprised a single short flight. For further testing of instruments, additional flights as well as comparison at appropriate reference fields are envisaged. The REFLECT provided valuable experience and feedback for validation of calculated aviation doses.
CitationAmbrožová, I. [et al.]. REFLECT – Research flight of EURADOS and CRREAT: Intercomparison of various radiation dosimeters onboard aircraft. "Radiation measurements", 1 Setembre 2020, vol. 137, p. 106433:1-106433:12.
URIhttp://hdl.handle.net/2117/331234
DOI10.1016/j.radmeas.2020.106433
ISSN1350-4487
Publisher versionhttps://www.sciencedirect.com/science/article/pii/S1350448720302110
Collections
Share: