Resolving and parameterising the Ocean Mesoscale in earth system models 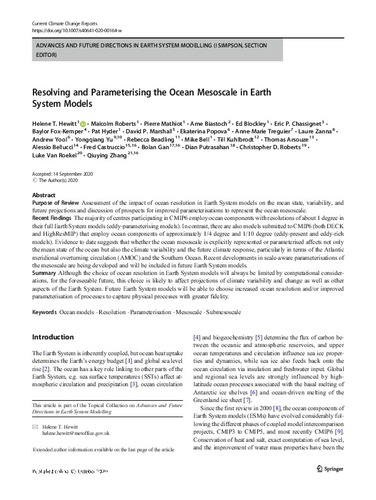 Except where otherwise noted, content on this work is licensed under a Creative Commons license : Attribution 3.0 Spain
ProjectPRIMAVERA - PRocess-based climate sIMulation: AdVances in high resolution modelling and European climate Risk Assessment (EC-H2020-641727)
Abstract
Purpose of Review Assessment of the impact of ocean resolution in Earth System models on the mean state, variability, and future projections and discussion of prospects for improved parameterisations to represent the ocean mesoscale. Recent Findings The majority of centres participating in CMIP6 employ ocean components with resolutions of about 1 degree in their full Earth System models (eddy-parameterising models). In contrast, there are also models submitted to CMIP6 (both DECK and HighResMIP) that employ ocean components of approximately 1/4 degree and 1/10 degree (eddy-present and eddy-rich models). Evidence to date suggests that whether the ocean mesoscale is explicitly represented or parameterised affects not only the mean state of the ocean but also the climate variability and the future climate response, particularly in terms of the Atlantic meridional overturning circulation (AMOC) and the Southern Ocean. Recent developments in scale-aware parameterisations of the mesoscale are being developed and will be included in future Earth System models. Summary Although the choice of ocean resolution in Earth System models will always be limited by computational considerations, for the foreseeable future, this choice is likely to affect projections of climate variability and change as well as other aspects of the Earth System. Future Earth System models will be able to choose increased ocean resolution and/or improved parameterisation of processes to capture physical processes with greater fidelity.
Description
This article is part of the Topical Collection on Advances and Future Directions in Earth System Modelling
CitationHewitt, H.T. [et al.]. Resolving and parameterising the Ocean Mesoscale in earth system models. "Current Climate Change Reports", Octubre 2020,
URIhttp://hdl.handle.net/2117/331227
DOI10.1007/s40641-020-00164-w
ISSN2198-6061
Publisher versionhttps://link.springer.com/article/10.1007/s40641-020-00164-w
Collections
Share: