Ladle steel slag in activated systems for construction use 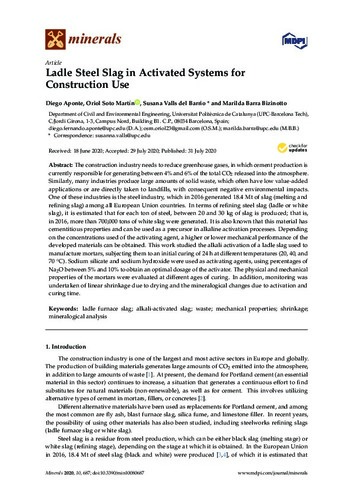 Except where otherwise noted, content on this work is licensed under a Creative Commons license : Attribution 3.0 Spain
Abstract
The construction industry needs to reduce greenhouse gases, in which cement production is currently responsible for generating between 4% and 6% of the total CO2 released into the atmosphere. Similarly, many industries produce large amounts of solid waste, which often have low value-added applications or are directly taken to landfills, with consequent negative environmental impacts. One of these industries is the steel industry, which in 2016 generated 18.4 Mt of slag (melting and refining slag) among all European Union countries. In terms of refining steel slag (ladle or white slag), it is estimated that for each ton of steel, between 20 and 30 kg of slag is produced; that is, in 2016, more than 700,000 tons of white slag were generated. It is also known that this material has cementitious properties and can be used as a precursor in alkaline activation processes. Depending on the concentrations used of the activating agent, a higher or lower mechanical performance of the developed materials can be obtained. This work studied the alkali activation of a ladle slag used to manufacture mortars, subjecting them to an initial curing of 24 h at different temperatures (20, 40, and 70 °C). Sodium silicate and sodium hydroxide were used as activating agents, using percentages of Na2O between 5% and 10% to obtain an optimal dosage of the activator. The physical and mechanical properties of the mortars were evaluated at different ages of curing. In addition, monitoring was undertaken of linear shrinkage due to drying and the mineralogical changes due to activation and curing time.
CitationAponte, D.F. [et al.]. Ladle steel slag in activated systems for construction use. "Minerals", Agost 2020, vol. 10, núm. 8, p. 687:1-687:12.
URIhttp://hdl.handle.net/2117/331192
DOI10.3390/min10080687
ISSN2075-163X
Publisher versionhttps://www.mdpi.com/2075-163X/10/8/687
Collections
Share: