The association between internet gaming disorder or pathological videogame use and comorbid psychopathology: a comprehensive review 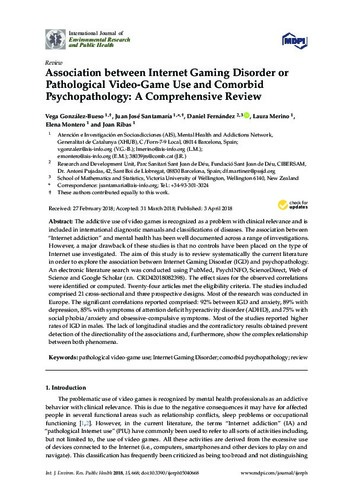 Merino, Laura
Montero, Elena
Ribas, Joan
Document typeArticle
Rights accessOpen Access
Abstract
The addictive use of video games is recognized as a problem with clinical relevance and is included in international diagnostic manuals and classifications of diseases. The association between “Internet addiction” and mental health has been well documented across a range of investigations. However, a major drawback of these studies is that no controls have been placed on the type of Internet use investigated. The aim of this study is to review systematically the current literature in order to explore the association between Internet Gaming Disorder (IGD) and psychopathology. An electronic literature search was conducted using PubMed, PsychINFO, ScienceDirect, Web of Science and Google Scholar (r.n. CRD42018082398). The effect sizes for the observed correlations were identified or computed. Twenty-four articles met the eligibility criteria. The studies included comprised 21 cross-sectional and three prospective designs. Most of the research was conducted in Europe. The significant correlations reported comprised: 92% between IGD and anxiety, 89% with depression, 85% with symptoms of attention deficit hyperactivity disorder (ADHD), and 75% with social phobia/anxiety and obsessive-compulsive symptoms. Most of the studies reported higher rates of IGD in males. The lack of longitudinal studies and the contradictory results obtained prevent detection of the directionality of the associations and, furthermore, show the complex relationship between both phenomena.
CitationGonzález, V. [et al.]. The association between internet gaming disorder or pathological videogame use and comorbid psychopathology: a comprehensive review. "International journal of environmental research and public health", 3 Abril 2018, vol. 15, núm. 4, p. 668-1-668-20.
URIhttp://hdl.handle.net/2117/331176
DOI10.3390/ijerph15040668
ISSN1660-4601
Publisher versionhttps://www.mdpi.com/1660-4601/15/4/668
Collections
Share: