Analysis of fragmentation of rock blocks from real-scale tests 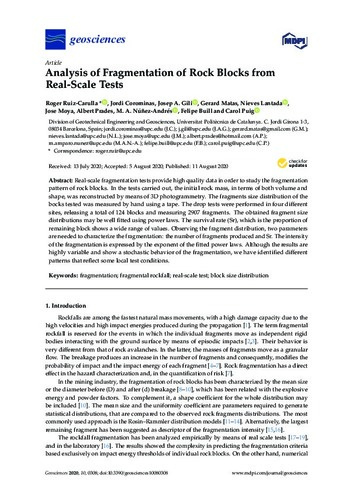 Document typeArticle
Rights accessOpen Access
Abstract
Real-scale fragmentation tests provide high quality data in order to study the fragmentation pattern of rock blocks. In the tests carried out, the initial rock mass, in terms of both volume and shape, was reconstructed by means of 3D photogrammetry. The fragments size distribution of the bocks tested was measured by hand using a tape. The drop tests were performed in four different sites, releasing a total of 124 blocks and measuring 2907 fragments. The obtained fragment size distributions may be well fitted using power laws. The survival rate (Sr), which is the proportion of remaining block shows a wide range of values. Observing the fragment distribution, two parameters are needed to characterize the fragmentation: the number of fragments produced and Sr. The intensity of the fragmentation is expressed by the exponent of the fitted power laws. Although the results are highly variable and show a stochastic behavior of the fragmentation, we have identified different patterns that reflect some local test conditions
CitationRuiz, R. [et al.]. Analysis of fragmentation of rock blocks from real-scale tests. "Geosciences (Switzerland)", Agost 2020, vol. 10, núm. 8, p. 308:1-308:19.
URIhttp://hdl.handle.net/2117/331095
DOI10.3390/geosciences10080308
ISSN2076-3263
Publisher versionhttps://www.mdpi.com/2076-3263/10/8/308
Collections
Share: