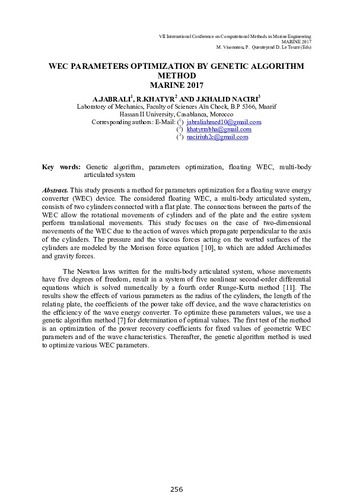 Show full item record
Jabrali, A.
Khatyr, R.
Naciri, J.Khalid
Document typeConference report
PublisherCIMNE
Rights accessOpen Access
Abstract
This study presents a method for parameters optimization for a floating wave energy converter (WEC) device. The considered floating WEC, a multi-body articulated system, consists of two cylinders connected with a flat plate. The connections between the parts of the WEC allow the rotational movements of cylinders and of the plate and the entire system perform translational movements. This study focuses on the case of two-dimensional movements of the WEC due to the action of waves which propagate perpendicular to the axis of the cylinders. The pressure and the viscous forces acting on the wetted surfaces of the cylinders are modeled by the Morison force equation [10], to which are added Archimedes and gravity forces. The Newton laws written for the multi-body articulated system, whose movements have five degrees of freedom, result in a system of five nonlinear second-order differential equations which is solved numerically by a fourth order Runge-Kutta method [11]. The results show the effects of various parameters as the radius of the cylinders, the length of the relating plate, the coefficients of the power take off device, and the wave characteristics on the efficiency of the wave energy converter. To optimize these parameters values, we use a genetic algorithm method [7] for determination of optimal values. The first test of the method is an optimization of the power recovery coefficients for fixed values of geometric WEC parameters and of the wave characteristics. Thereafter, the genetic algorithm method is used to optimize various WEC parameters.
CitationJabrali, A.; Khatyr, R.; Naciri, J.K. Wec parameters optimization by genetic algorithm method. A: MARINE VI. "MARINE VI : proceedings of the VI International Conference on Computational Methods in Marine Engineering". CIMNE, 2017, p. 225-265. ISBN 978-84-943928-6-3.
URIhttp://hdl.handle.net/2117/331051
ISBN978-84-943928-6-3
Collections
Share: