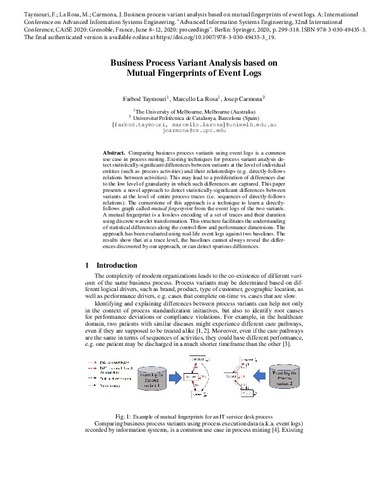 Document typeConference report
PublisherSpringer
Rights accessOpen Access
Abstract
Comparing business process variants using event logs is a common use case in process mining. Existing techniques for process variant analysis detect statistically-significant differences between variants at the level of individual entities (such as process activities) and their relationships (e.g. directly-follows relations between activities). This may lead to a proliferation of differences due to the low level of granularity in which such differences are captured. This paper presents a novel approach to detect statistically-significant differences between variants at the level of entire process traces (i.e. sequences of directly-follows relations). The cornerstone of this approach is a technique to learn a directly-follows graph called mutual fingerprint from the event logs of the two variants. A mutual fingerprint is a lossless encoding of a set of traces and their duration using discrete wavelet transformation. This structure facilitates the understanding of statistical differences along the control-flow and performance dimensions. The approach has been evaluated using real-life event logs against two baselines. The results show that at a trace level, the baselines cannot always reveal the differences discovered by our approach, or can detect spurious differences.
CitationTaymouri, F.; La Rosa, M.; Carmona, J. Business process variant analysis based on mutual fingerprints of event logs. A: International Conference on Advanced Information Systems Engineering. "Advanced Information Systems Engineering, 32nd International Conference, CAiSE 2020: Grenoble, France, June 8–12, 2020: proceedings". Berlín: Springer, 2020, p. 299-318. ISBN 978-3-030-49435-3. DOI 10.1007/978-3-030-49435-3_19.
URIhttp://hdl.handle.net/2117/331005
DOI10.1007/978-3-030-49435-3_19
ISBN978-3-030-49435-3
Publisher versionhttps://link.springer.com/chapter/10.1007/978-3-030-49435-3_19
Collections
Share: