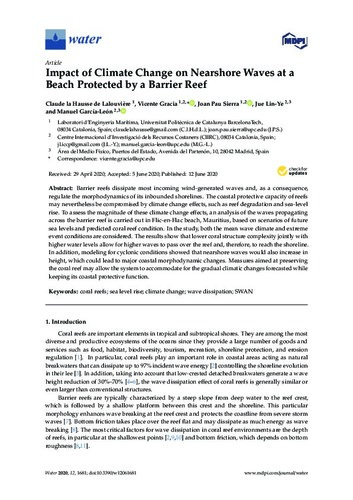 Document typeArticle
Rights accessOpen Access
Abstract
Barrier reefs dissipate most incoming wind-generated waves and, as a consequence, regulate the morphodynamics of its inbounded shorelines. The coastal protective capacity of reefs may nevertheless be compromised by climate change effects, such as reef degradation and sea-level rise. To assess the magnitude of these climate change effects, an analysis of the waves propagating across the barrier reef is carried out in Flic-en-Flac beach, Mauritius, based on scenarios of future sea levels and predicted coral reef condition. In the study, both the mean wave climate and extreme event conditions are considered. The results show that lower coral structure complexity jointly with higher water levels allow for higher waves to pass over the reef and, therefore, to reach the shoreline. In addition, modeling for cyclonic conditions showed that nearshore waves would also increase in height, which could lead to major coastal morphodynamic changes. Measures aimed at preserving the coral reef may allow the system to accommodate for the gradual climatic changes forecasted while keeping its coastal protective function.
CitationLa Hausse, C. [et al.]. Impact of climate change on nearshore waves at a beach protected by a barrier reef. "Water", Juny 2020, vol. 12, núm. 6, p. 1681:1-1681:21.
URIhttp://hdl.handle.net/2117/330885
DOI10.3390/W12061681
ISSN2073-4441
Publisher versionhttps://www.mdpi.com/2073-4441/12/6/1681
Collections
Share: