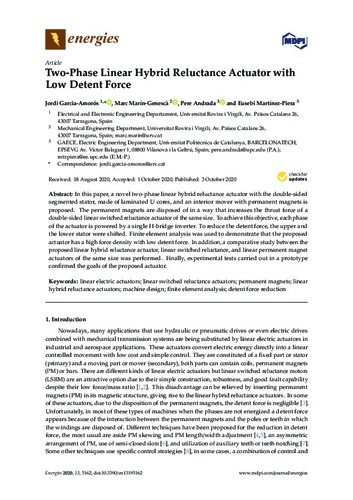 Document typeArticle
Rights accessOpen Access
Abstract
In this paper, a novel two-phase linear hybrid reluctance actuator with the double-sided segmented stator, made of laminated U cores, and an interior mover with permanent magnets is proposed. The permanent magnets are disposed of in a way that increases the thrust force of a double-sided linear switched reluctance actuator of the same size. To achieve this objective, each phase of the actuator is powered by a single H-bridge inverter. To reduce the detent force, the upper and the lower stator were shifted. Finite element analysis was used to demonstrate that the proposed actuator has a high force density with low detent force. In addition, a comparative study between the proposed linear hybrid reluctance actuator, linear switched reluctance, and linear permanent magnet actuators of the same size was performed. Finally, experimental tests carried out in a prototype confirmed the goals of the proposed actuator.
CitationGarcia, J. [et al.]. Two-phase linear hybrid reluctance actuator with low detent force. "Energies", 3 Octubre 2020, vol. 13, núm. 19, p. 1:5162-16:5162.
URIhttp://hdl.handle.net/2117/330865
DOI10.3390/en13195162
ISSN1996-1073
Publisher versionhttps://www.mdpi.com/1996-1073/13/19/5162
Collections
Share: