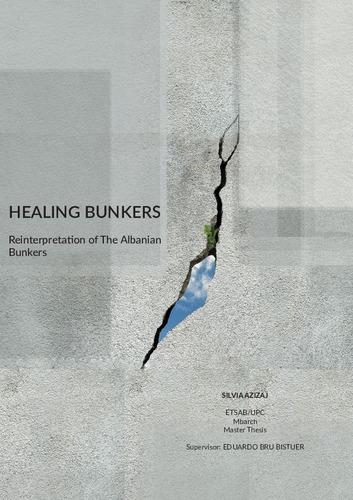 Document typeMaster thesis
Rights accessOpen Access
Abstract
The Albanian landscape, all across from its highlands to the coastal areas, has more than half of a century that is being dotted from these small monolithic structures called the bunkers. The bunkers were a construction that came from the time when communist regime was ruling the country, and it was supposedly built to protect the people, from a threat that never actually existed. Expect the fact that the bunkers reflect the paranoia of their ideator, they become a special case of a bunker also in the bigger arena of the defensive architecture built in the world, since it was never really used. The bunker was more a semantic representation of the actuality of the country at that time, small, isolated and ready to protect their country from anyone with the naivety of their scale.But right now the bunker only exists in the lands of country, it does not coexist with its people. To achieve the coexistence the bunker is analysed and comprehended as an objet trouve, leading to its reinterpretation as an architectural object made for people and by people. Hauling around with the confusion of reactions it gives to people, the new reinterpretation seeks to help the contemporary man not only to surpass the bunkers mentality somehow, but also give a more pleasant glimpse of verve at the chaotic experience that is life today.
Description
MBArch -- The Contemporary Project
SubjectsBunkers (Fortification), Bunkers (Fortification) -- Albania, Bunkers (Fortification) -- Remodeling for other use, Architecture -- Composition, proportion, etc., Búnquers, Búnquers -- Albània, Búnquers -- Conversió, Arquitectura -- Composició, proporció, etc.
DegreeMÀSTER UNIVERSITARI EN ESTUDIS AVANÇATS EN ARQUITECTURA-BARCELONA (Pla 2015)
Location
1: Diefdijk 5, 4122 KP Zijderveld, Països Baixos
2: Jisr, Beirut, Líban
URIhttp://hdl.handle.net/2117/330600
Collections
Share: