Urban gear: the role of shape in the connection of the city 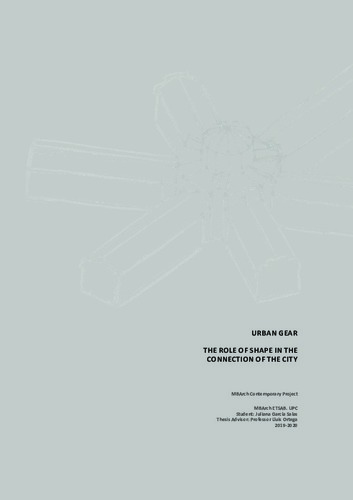 Document typeMaster thesis
Rights accessOpen Access
Abstract
The form in the architecture is of fundamental importance, it is not only the container of the spaces, but also the one that establishes a link between the exterior and the interior. The form generates a number of possible relationships and can be static and rigid as well as fluid and with movement. An example that has established a definition of form in architecture is the panopticon, in principle this was conceived as a control device where the prisoners self-regulated their behavior with the internationalization of obedience. In this sense, beyond the creation of a stereotype, the panopticon is configured as a characteristic architectural element. It constitutes a central zone that through its radial organization arranges the different modules and eventually ends up creating a building with a very atypical shape to most of the urban morphologies where it is established. It is then, when we can see the general panorama of La Modelo prison, a building with a heavy weight in the social memory, but that is completely out of its context. In this sense, the project has an intervention on an urban and project scale. In the first one, the building is configured as an urban gear, which allows the articulation with different points of its context, generating in this way a connection network. As for the scale of the project, the aim is to invert the organization of the panopticon and through a radial disposition exploit the new functions of each module towards the city. The shape of the building as such gives the possibility of generating different interventions, in its modules different functions can be created, the central point is the point of convergence and the intermediate spaces that are generated by the location of the modules are consolidated as areas of connection of the public space with the interior.
Description
MBArch -- The Contemporary Project
SubjectsArchitecture -- Composition, proportion, etc., Panóptico, Prisons -- Buildings-- Remodeling for other use -- Spain -- Barcelona, Public spaces -- Spain -- Barcelona, Arquitectura -- Composició, proporció, etc., Panòptic, Presó Model de Barcelona, Presons -- Edificis -- Conversió -- Catalunya -- Barcelona, Espais públics -- Catalunya -- Barcelona
DegreeMÀSTER UNIVERSITARI EN ESTUDIS AVANÇATS EN ARQUITECTURA-BARCELONA (Pla 2015)
Location
1: Carrer del Rosselló, 2, 08029 Barcelona, Espanya
URIhttp://hdl.handle.net/2117/330598
Collections
Share: