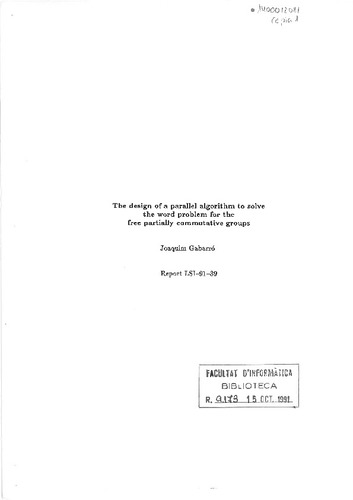 Document typeExternal research report
Rights accessOpen Access
Abstract
We develop a parallel algorithm to solve the word problem for free partially commutative groups. These groups were introduced by C. Wrathall to generalize free groups. We represent the elements of these groups as a certain type of acyclic labeled graphs called dependency graphs. These graphs were introduced by A Maxurkiewicz to model concurrent systems. First we study the parallel complexity of some basic problems arising in the study of dependency graphs. Such as correctness, isomorphism and relations with traces. Parallel algorithms are developed to solve all of them. Second we consider the combinatorial properties of free partially commutative groups. To do this we associate to every group a rewriting system over dependency graphs. Finally we apply all these ideas to solve in parallel the word problem. Special emphasis is given in the design of the algorithms. The modular approach is widely used to obtain readable programs. It seems that many of the structuring techniques developed in sequential programming can be used directly in the PRAM context.
CitationGabarro, J. The design of a parallel algorithm to solve the word problem for the free partially commutative groups. 1991.
Is part ofLSI-91-39
URIhttp://hdl.handle.net/2117/330529
Collections
Share: