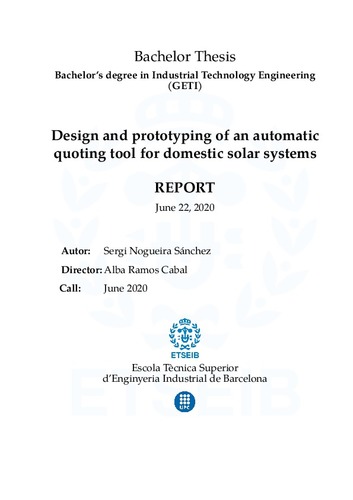 Document typeBachelor thesis
Rights accessOpen Access
Abstract
This project revolves around the creation of a tool that is capable of sizing solar systems based on a short and simple interaction with its users. Photovoltaic, thermal and hybrid solar technologies are used for the designed system to be able to cover the highest possible percentage of the total energy demand of a household. The tool also pursues maximizing the profit that can be obtained from the system by optimally combining the aforementioned technologies. This report explains how the final web application has been built. Firstly, a brief market study was conducted to see what other already available tools were like, and if any features were (not) to be adopted from them. Secondly, some research was done on solar energy in order to be able to devise a calculation process that met the requirements of the project. Once this process was determined, the tool was implemented as a singlepage web application using mainly the JavaScript programming language and the user interface was designed. Finally, a usage example of the tool was made in order to assess the outcome and compare it to what the initially evaluated tools had to offer.
SubjectsPhotovoltaic power generation, Energia solar fotovoltaica
URIhttp://hdl.handle.net/2117/330434
Collections
Share: