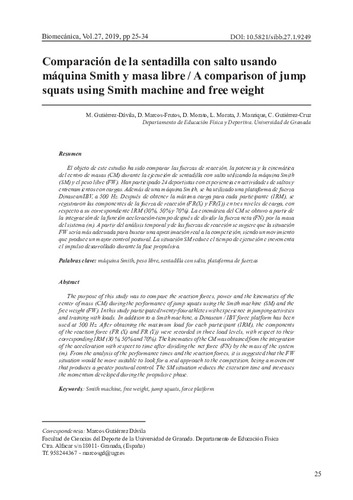 Show full item record
Gutiérrez-Dávila, Marcos
Marcos-Frutos, D.
Morato, D.
Morata, L.
Manrique, J.
Gutiérrez Cruz, C.
Document typeArticle
Rights accessOpen Access
All rights reserved. This work is protected by the corresponding intellectual and industrial property rights. Without prejudice to any existing legal exemptions, reproduction, distribution, public communication or transformation of this work are prohibited without permission of the copyright holder
Abstract
The purpose of this study was to compare the reaction forces, power and the kinematics of the center of mass (CM) during the performance of jump squats using the Smith machine (SM) and the free weight (FW). In this study participated twenty-four athletes with experience in jumping activities and training with loads. In addition to a Smith machine, a Dinascan / IBV force platform has been used at 500 Hz. After obtaining the maximum load for each participant (1RM), the components of the reaction force (FR (X) and FR (Y)) were recorded in three load levels, with respect to their corresponding 1RM (30 %, 50% and 70%). The kinematics of the CM was obtained from the integration of the acceleration with respect to time after dividing the net force (FN) by the mass of the system (m). From the analysis of the performance times and the reaction forces, it is suggested that the FW situation would be more suitable to look for a real approach to the competition, being a movement that produces a greater postural control. The SM situation reduces the execution time and increases the momentum developed during the propulsive phase, which suggests that it could be more suitable for training the development of force at high speeds of concentric contraction.
CitationGutiérrez-Dávila, M., [et al.]. Comparación de las sentadillas con salto usando máquina Smith y masa libre. A: "Biomecánica", 2019, vol. 27, núm. 1, pp. 25-34
URIhttp://hdl.handle.net/2117/330424
DOI10.5821/sibb.27.1.9249
DLB.9920-2006
ISSN1885-9518
Collections
Share: