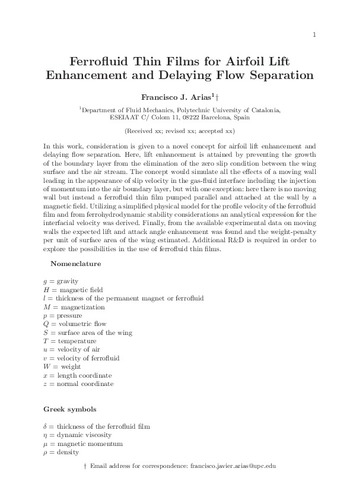 Document typeArticle
PublisherCambridge University Press
Rights accessOpen Access
Abstract
In this work, consideration is given to a novel concept for aerofoil lift enhancement and delaying flow separation. Here, lift enhancement is attained by preventing the growth of the boundary layer through the elimination of the zero-slip condition between the wing surface and the air stream. The concept would simulate all the effects of a moving wall, leading to the appearance of a slip velocity at the gas–fluid interface, including the injection of momentum into the air boundary layer, but with one exception: here there is no moving wall but instead a ferrofluid thin film pumped parallel and attached to the wall by a magnetic field. Utilising a simplified physical model for the velocity profile of the ferrofluid film and based on ferrohydrodynamic stability considerations, an analytical expression for the interfacial velocity is derived. Finally, from the available experimental data on moving walls, the expected lift and angle-of-attack enhancement are found as well as the weight penalty per unit surface area of the wing is estimated. Additional research and development is required to explore the possibilities of using ferrofluid thin films
CitationArias, F.J. Ferrofluid thin films for aerofoil lift enhancement and delaying flow separation. "Aeronautical Journal", December 2020, vol.124 , núm.1282 , p.1865-1878
URIhttp://hdl.handle.net/2117/330372
DOI10.1017/aer.2020.65
ISSN00019240
Collections
Share: