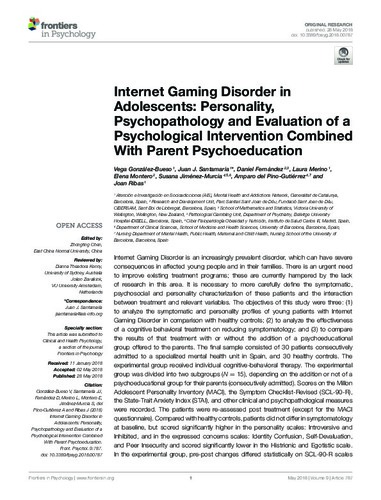 Merino, Laura
Montero, Elena
Jiménez Murcia, Susana
del Pino Gutiérrez, Amparo
Ribas, Joan
Document typeArticle
Rights accessOpen Access
Abstract
Internet Gaming Disorder is an increasingly prevalent disorder, which can have severe consequences in affected young people and in their families. There is an urgent need to improve existing treatment programs; these are currently hampered by the lack of research in this area. It is necessary to more carefully define the symptomatic, psychosocial and personality characterization of these patients and the interaction between treatment and relevant variables. The objectives of this study were three: (1) to analyze the symptomatic and personality profiles of young patients with Internet Gaming Disorder in comparison with healthy controls; (2) to analyze the effectiveness of a cognitive behavioral treatment on reducing symptomatology; and (3) to compare the results of that treatment with or without the addition of a psychoeducational group offered to the parents. The final sample consisted of 30 patients consecutively admitted to a specialized mental health unit in Spain, and 30 healthy controls. The experimental group received individual cognitive-behavioral therapy. The experimental group was divided into two subgroups (N = 15), depending on the addition or not of a psychoeducational group for their parents (consecutively admitted). Scores on the Millon Adolescent Personality Inventory (MACI), the Symptom Checklist-Revised (SCL-90-R), the State-Trait Anxiety Index (STAI), and other clinical and psychopathological measures were recorded. The patients were re-assessed post treatment (except for the MACI questionnaire). Compared with healthy controls, patients did not differ in symptomatology at baseline, but scored significantly higher in the personality scales: Introversive and Inhibited, and in the expressed concerns scales: Identity Confusion, Self-Devaluation, and Peer Insecurity and scored significantly lower in the Histrionic and Egotistic scale. In the experimental group, pre-post changes differed statistically on SCL-90-R scales Hostility, Psychoticism, and Global Severity Index and on the diagnostic criteria for Internet Gaming Disorder, regardless of the addition of a psychoeducational group for parents. Pre-post changes did not differ between experimental subgroups. However, the subgroup without psychoeducation for parents presented statistically higher drop-out rates during treatment. The results of this study are based on a sample of patients seeking treatment related to problems with online gaming, therefore, they may be of value for similar patients.
CitationGonzález, V. [et al.]. Internet Gaming Disorder in adolescents: personality, psychopathology and evaluation of a psychological intervention combined with parent psychoeducation. "Frontiers in Psychology", 28 Maig 2018, vol. 9, p. 787-1-787-15.
URIhttp://hdl.handle.net/2117/330369
DOI10.3389/fpsyg.2018.00787
ISSN1664-1078
Publisher versionhttps://www.frontiersin.org/articles/10.3389/fpsyg.2018.00787/full
Collections
Share: