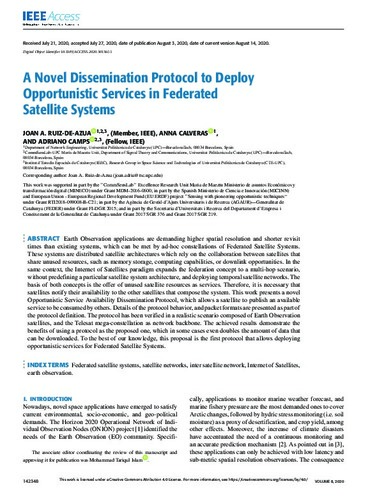 Document typeArticle
PublisherInstitute of Electrical and Electronics Engineers (IEEE)
Rights accessOpen Access
Abstract
The Earth Observation community is demanding new satellite applications that cover the need of monitoring different areas with high spatial resolution and short revisit times. These applications will generate huge amounts of data, and thus improvements in the downlink capacity are mandatory. Distributed Satellite Systems have emerged as a moderate-risk and cost-effective solution to meet these new requirements. These systems are groups of satellites that share a global and common objective. One of these systems are the Federated Satellite Systems, which rely on the collaboration between satellites that share unused resources, such as memory storage, computing capabilities, or downlink opportunities. In the same context, the Internet of Satellites paradigm expands the FSS concept to a multi-hop scenario, without predefining a satellite system architecture, and deploying temporal satellite networks. The basis of both concepts is the offer of unused satellite resources as services, being necessary that satellites notify their availability to other satellites that composes the system. This work presents the Opportunistic Service Avaliability Dissemination Protocol, which allows a satellite to publish an available service to be consumed by others. Details of the protocol behavior, and packet formats are presented as part of the protocol definition. Additionally, without loss of generality, the protocol has been verified in a realistic scenario composed of Earth Observation satellites, and the Telesat mega-constellation as a network backbone. The achieved results demonstrate the benefits of using the proposed protocol by doubling the downloaded data in some cases.
CitationRuiz-de-Azua, J.A.; Calveras, A.; Camps, A. A novel dissemination protocol to deploy opportunistic services in federated satellite systems. "IEEE access", 3 Agost 2020, vol. 8, p. 142348-142365.
URIhttp://hdl.handle.net/2117/330358
DOI10.1109/ACCESS.2020.3013655
ISSN2169-3536
Publisher versionhttps://ieeexplore.ieee.org/document/9154419
Collections
Share: