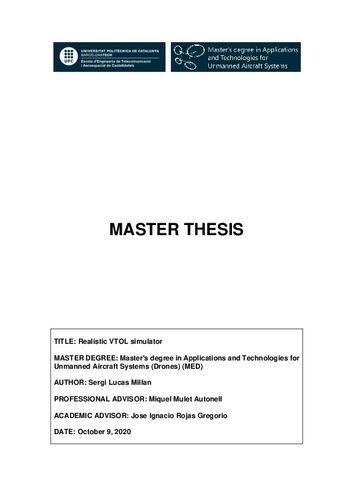 hotmail.com
Tutor / director / evaluatorRojas Gregorio, Josep Ignasi; Mulet Autonell, Miquel
CovenanteeVenturi Unmanned Technologies
Document typeMaster thesis
Rights accessOpen Access
Abstract
This master's thesis is focused on the development of a VTOL drone flight simulator. Two main objectives have been set. The first one is that the simulator must simulate all the flight phases of a VTOL. To make it possible, the simulator software is integrated with the simulation of the drone flight controller, which can be ArduPilot or PX4. The second objective is that it should be possible to control the simulated UAV via radio control, in the same way that we would do with a real drone. The thesis is structured in four chapters. In the first chapter, we do a study of the different types of VTOL drones. There are mainly three types: tailsitters, tiltrotors, and QuadPlanes. The three flight phases of a VTOL (vertical take-off and landing, transition and horizontal flight) are also studied. The advantages of a VTOL over a fixed-wing and a multirotor are studied. Finally, we analyse the characteristics of the VTOL that Venturi is developing, called V1. The second chapter summarizes the European laws that affect drones. There are currently two laws: Delegated Regulation 2019/945 and Implementing Regulation 2019/947. The first regulation classifies drones into five classes, according to their capabilities and characteristics. The second regulation deals with the rules and procedures that drones must fulfil. Operations are classified into three categories: open, specific and certified. In the third chapter, a study of the software that is being used for simulation of UAVs is done. The pros and cons of each option are analysed. In view of this study, Gazebo, a robot simulation environment, is chosen for this project. Finally, the last chapter explains the structure of the software that has been developed to carry out the desired simulation. Then, to test this simulator, tests are done with two different QuadPlane models: a model designed by Gazebo and a model of the Venturi V1. Three tests are performed for each of these QuadPlane models: 1) a test of the rotation of the engines and movement of the control surfaces; 2) a test in which the UAV must follow a pre-planned mission; and 3) a test in which we try to control the drone with a joystick. For the first UAV model, the three tests are satisfactory; in particular, the computed average error when following the planned mission is 1.9 m. Moreover, in the joystick control test, the drone responds perfectly to the controls, just like a real VTOL. For the Venturi V1, the first test is satisfactory, but unfortunately the second and third tests cannot be carried out, likely due to an error in the Gazebo model of the V1. As a result of this project, the developed simulator is being integrated in Venturi with a computer vision system for detection of pedestrians, to make safer landings, and for detection of the power lines, so that the UAV can follow them autonomously during power line inspection missions.
SubjectsVertically rising aircraft, Avions no tripulats -- Mètodes de simulació
URIhttp://hdl.handle.net/2117/330201
Collections
Share: