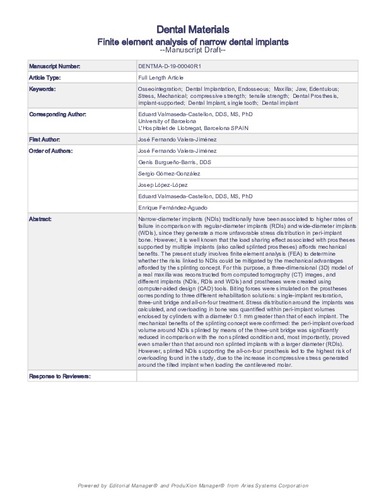 Except where otherwise noted, content on this work is licensed under a Creative Commons license : Attribution-NonCommercial-NoDerivs 3.0 Spain
Abstract
Narrow-diameter implants (NDIs) traditionally have been associated to higher rates of failure in comparison with regular-diameter implants (RDIs) and wide-diameter implants (WDIs), since they generate a more unfavorable stress distribution in peri-implant bone. However, it is well known that the load sharing effect associated with prostheses supported by multiple implants (also called splinted prostheses) affords mechanical benefits. The present study involves finite element analysis (FEA) to determine whether the risks linked to NDIs could be mitigated by the mechanical advantages afforded by the splinting concept. For this purpose, a three-dimensional (3D) model of a real maxilla was reconstructed from computed tomography (CT) images, and different implants (NDIs, RDIs and WDIs) and prostheses were created using computer-aided design (CAD) tools. Biting forces were simulated on the prostheses corresponding to three different rehabilitation solutions: single-implant restoration, three-unit bridge and all-on-four treatment. Stress distribution around the implants was calculated, and overloading in bone was quantified within peri-implant volumes enclosed by cylinders with a diameter 0.1 mm greater than that of each implant. The mechanical benefits of the splinting concept were confirmed: the peri-implant overloaded volume around NDIs splinted by means of the three-unit bridge was significantly reduced in comparison with the nonsplinted condition and, most importantly, proved even smaller than that around nonsplinted implants with a larger diameter (RDIs). However, splinted NDIs supporting the all-on-four prosthesis led to the highest risk of overloading found in the study, due to the increase in compressive stress generated around the tilted implant when loading the cantilevered molar.
CitationValera, J. [et al.]. Finite element analysis of narrow dental implants. "Dental materials", 8 Juliol 2020, vol. 36, núm. 7, p. 927-935.
URIhttp://hdl.handle.net/2117/330167
DOI10.1016/j.dental.2020.04.013
ISSN0109-5641
Publisher versionhttps://www.sciencedirect.com/science/article/abs/pii/S0109564120301226
Collections
Share: