Study: Visualization of spacecraft trajectories with NASA SPICE and Blender 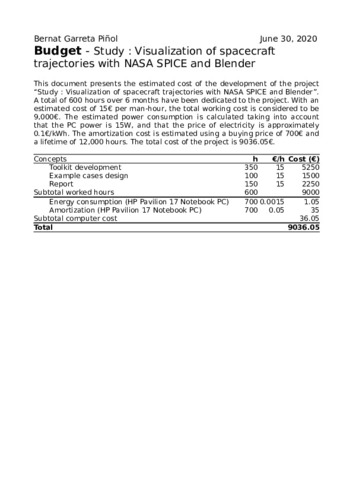 Except where otherwise noted, content on this work is licensed under a Creative Commons license : Attribution 3.0 Spain
Abstract
Visualizing spacecraft trajectories is interesting because of its compelling applications. From educational and public divulgation purposes, to mission planning and analysis, many fields can benefit from research in this topic. This project aims to provide with a tool to visualize such trajectories in a comprehensible three-dimensional manner. For this reason, a toolkit programmed in python and integrated into Blender and using the SPICE system has been developed. On rare occasions SPICE and Blender have been integrated together. SPICE is a system created by NASA with the goal of assisting engineers and scientist in the planning and interpretation of space instruments observations, and in space exploration modeling and planning. It is a tool that analyzes data sets composed of navigation information to obtain precise observation geometry. Blender is a free and open-source 3D fully integrated 3D creation suite. It supports modeling, animation, rendering and video editing, among many other features. The toolbox developed is able to recreate scenes by retrieving location, orientation and other data from SPICE, and applying this information to the animation. All space bodies are created as instances of different classes, which consist of planets, moons, stars and spacecrafts. The Blender scene is recreated using ancillary functions and the class functions of each object, which consist of creating the different objects in the scene, applying them their texture and animating the multiple bodies at each frame. The toolkit makes use of the Blender API to access the program using its functions and classes. The in-built Blender renders Eevee and Cycles are used to obtain images and videos. The primitive mesh UV sphere is used to recreate the solar system bodies and stars, alongside materials with map textures. 3D models are used for the spacecrafts. Some examples have been recreated to illustrate the capabilities of the developed toolkit. These consist of a recreation of the iconic image “Earth rising over the Moon’s Horizon”, an animation of the inner solar system during a whole year, a comparison of the constellations viewed from the Earth, two recreations of real images taken by Cassini one depicting three Saturn moons as they orbit over the rings and the other the moon Pan inside the Encke gap, an animation of the trajectory and attitude of Cassini during the insertion into Saturn orbit, and a recreation of an image taken by Voyager 1 showing an ongoing eruption on Io. Overall, the toolkit is able to successfully recreate scenarios involving spacecrafts and their trajectories. It enables the user to comprehend the three-dimensional relative position of the bodies, and to recreate real images taken by spacecraft as well as simulate pictures that never happened. For these reasons, amongst its most important applications are education and dissemination.
SubjectsSpace trajectories, Space vehicles, Trajectòries espacials, Vehicles espacials
DegreeGRAU EN ENGINYERIA EN VEHICLES AEROESPACIALS (Pla 2010)
URIhttp://hdl.handle.net/2117/330122
Collections
Share: