Epoxy composites filled with boron nitride: cure kinetics and the effect of particle shape on the thermal conductivity 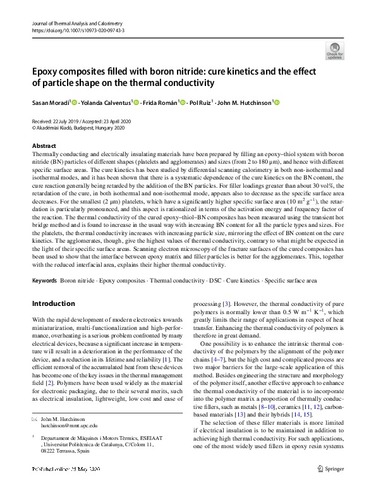 Document typeArticle
PublisherSpringer
Rights accessOpen Access
Abstract
Thermally conducting and electrically insulating materials have been prepared by filling an epoxy–thiol system with boron nitride (BN) particles of different shapes (platelets and agglomerates) and sizes (from 2 to 180 µm), and hence with different specific surface areas. The cure kinetics has been studied by differential scanning calorimetry in both non-isothermal and isothermal modes, and it has been shown that there is a systematic dependence of the cure kinetics on the BN content, the cure reaction generally being retarded by the addition of the BN particles. For filler loadings greater than about 30 vol%, the retardation of the cure, in both isothermal and non-isothermal mode, appears also to decrease as the specific surface area decreases. For the smallest (2 µm) platelets, which have a significantly higher specific surface area (10 m2 g-1), the retardation is particularly pronounced, and this aspect is rationalized in terms of the activation energy and frequency factor of the reaction. The thermal conductivity of the cured epoxy–thiol–BN composites has been measured using the transient hot bridge method and is found to increase in the usual way with increasing BN content for all the particle types and sizes. For the platelets, the thermal conductivity increases with increasing particle size, mirroring the effect of BN content on the cure kinetics. The agglomerates, though, give the highest values of thermal conductivity, contrary to what might be expected in the light of their specific surface areas. Scanning electron microscopy of the fracture surfaces of the cured composites has been used to show that the interface between epoxy matrix and filler particles is better for the agglomerates. This, together with the reduced interfacial area, explains their higher thermal conductivity.
CitationMoradi, S. [et al.]. Epoxy composites filled with boron nitride: cure kinetics and the effect of particle shape on the thermal conductivity. "Journal of thermal analysis and calorimetry", 25 Maig 2020, vol. 140, p. 1-11.
URIhttp://hdl.handle.net/2117/330118
DOI10.1007/s10973-020-09743-3
ISSN1388-6150
Publisher versionhttps://link.springer.com/article/10.1007%2Fs10973-020-09743-3
Collections
Share: