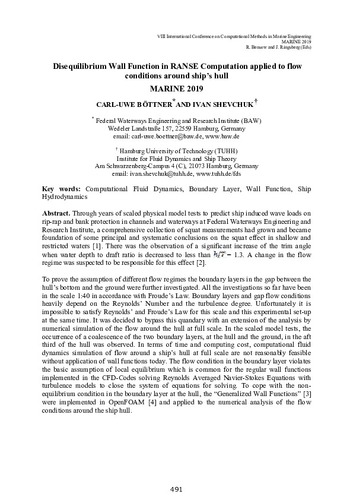 Show full item record
Böttner, Carl-Uwe
Shevchuk, Ivan Shev
Document typeConference report
PublisherCIMNE
Rights accessOpen Access
Abstract
Through years of scaled physical model tests to predict ship induced wave loads on rip-rap and bank protection in channels and waterways at Federal Waterways Engineering and Research Institute, a comprehensive collection of squat measurements had grown and became foundation of some principal and systematic conclusions on the squat effect in shallow and restricted waters [1]. There was the observation of a significant increase of the trim angle when water depth to draft ratio is decreased to less than = 1.3. A change in the flow regime was suspected to be responsible for this effect [2]. To prove the assumption of different flow regimes the boundary layers in the gap between the hull’s bottom and the ground were further investigated. All the investigations so far have been in the scale 1:40 in accordance with Froude’s Law. Boundary layers and gap flow conditions heavily depend on the Reynolds’ Number and the turbulence degree. Unfortunately it is impossible to satisfy Reynolds’ and Froude’s Law for this scale and this experimental set-up at the same time. It was decided to bypass this quandary with an extension of the analysis by numerical simulation of the flow around the hull at full scale. In the scaled model tests, the occurrence of a coalescence of the two boundary layers, at the hull and the ground, in the aft third of the hull was observed. In terms of time and computing cost, computational fluid dynamics simulation of flow around a ship’s hull at full scale are not reasonably feasible without application of wall functions today. The flow condition in the boundary layer violates the basic assumption of local equilibrium which is common for the regular wall functions implemented in the CFD-Codes solving Reynolds Averaged Navier-Stokes Equations with turbulence models to close the system of equations for solving. To cope with the non-equilibrium condition in the boundary layer at the hull, the “Generalized Wall Functions” [3] were implemented in OpenFOAM [4] and applied to the numerical analysis of the flow conditions around the ship hull.
CitationBöttner, C.-U.; Shevchuk, I.S. Disequilibrium Wall Function in RANSE Computation applied to flow conditions around ship's hull. A: MARINE VIII. "MARINE VIII : proceedings of the VIII International Conference on Computational Methods in Marine Engineering". CIMNE, 2019, p. 491-501. ISBN 978-84-949194-3-5.
URIhttp://hdl.handle.net/2117/330018
ISBN978-84-949194-3-5
Collections
Share: