Tokyo: Towards a New Publicness 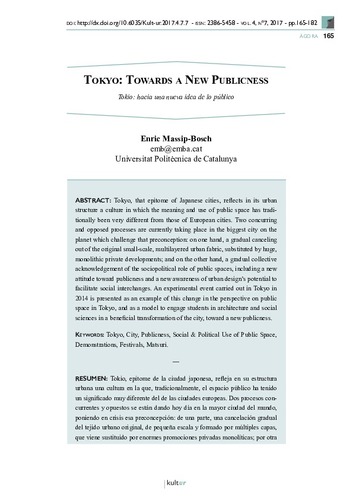 Document typeArticle
PublisherUniversitat Jaume I
Rights accessOpen Access
Abstract
Tokyo, that epitome of Japanese cities, reflects in its urban structure a culture in which the meaning and use of public space has traditionally been very different from those of European cities. Two concurring and opposed processes are currently taking place in the biggest city on the planet which challenge that preconception: on one hand, a gradual canceling out of the original small-scale, multilayered urban fabric, substituted by huge, monolithic private developments; and on the other hand, a gradual collective acknowledgement of the sociopolitical role of public spaces, including a new attitude toward publicness and a new awareness of urban design’s potential to facilitate social interchanges. An experimental event carried out in Tokyo in 2014 is presented as an example of this change in the perspective on public space in Tokyo, and as a model to engage students in architecture and social sciences in a beneficial transformation of the city, toward a new publicness.
Location
1: Unnamed Road, 2-chōme-45 Izumi, Suginami City, Tōkyō-to 168-0063, Japó
CitationMasip, E. Tokyo: Towards a New Publicness. "Kultur. Revista interdisciplinària sobre la cultura de la ciutat", 2017, vol. 4, núm. 7, p. 165-182.
URIhttp://hdl.handle.net/2117/329965
DOI10.6035/Kult-ur.2017.4.7.7
ISSN2386-5458
Publisher versionhttp://www.e-revistes.uji.es/index.php/kult-ur/index
Collections
Share: