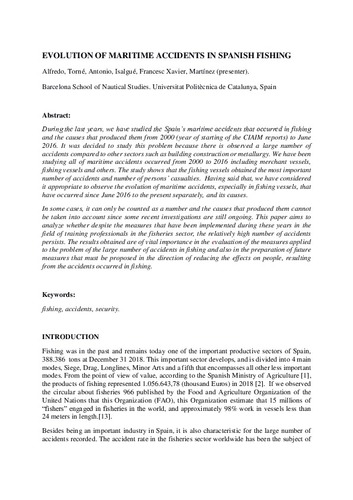 Document typeConference report
PublisherUniversitat Politècnica de Catalunya. Departament de Ciència i Enginyeria Nàutiques
Rights accessOpen Access
Abstract
During the last years, we have studied the Spain’s maritime accidents that occurred in fishing and the causes that produced them from 2000 (year of starting of the CIAIM reports) to June 2016. It was decided to study this problem because there is observed a large number of accidents compared to other sectors such as building construction or metallurgy. We have been studying all of maritime accidents occurred from 2000 to 2016 including merchant vessels, fishing vessels and others. The study shows that the fishing vessels obtained the most important number of accidents and number of persons’ casualties. Having said that, we have considered it appropriate to observe the evolution of maritime accidents, especially in fishing vessels, that have occurred since June 2016 to the present separately, and its causes. In some cases, it can only be counted as a number and the causes that produced them cannot be taken into account since some recent investigations are still ongoing. This paper aims to analyze whether despite the measures that have been implemented during these years in the field of training professionals in the fisheries sector, the relatively high number of accidents persists. The results obtained are of vital importance in the evaluation of the measures applied to the problem of the large number of accidents in fishing and also in the preparation of future measures that must be proposed in the direction of reducing the effects on people, resulting from the accidents occurred in fishing.
CitationTorné Reverté, A.; Isalgué Buxeda, A.; Martínez de Osés, F.X. Evolution of maritime accidents in spanish fishing. A: Martínez, F.X.;Castells, M.; Martín, M.; Puente, J.M. (eds.). "Maritime Transport VIII : proceedings of the 8th International Conference on Maritime Transport : Technology, Innovation and Research : Maritime Transport'20". Barcelona: Universitat Politècnica de Catalunya. Departament de Ciència i Enginyeria Nàutiques, 2020, p. 389-397. ISBN 978-84-9880-827-8.
URIhttp://hdl.handle.net/2117/329948
ISBN978-84-9880-827-8
Collections
Share: