Study of feasibility of attitude control system for a 3U cubesat based on gravity-boom. 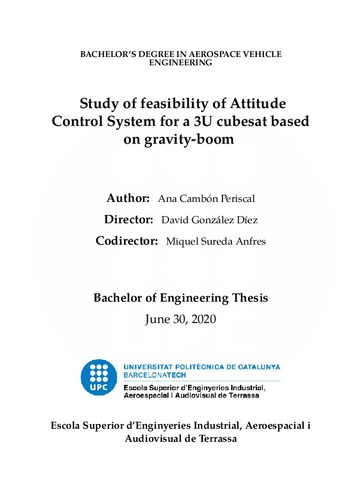 CovenanteeUniversidade de Vigo
Document typeBachelor thesis
Rights accessOpen Access
Abstract
The AOCS is the system needed in order to know the orientation of our space vehicle and be able to control it so it is possible to reach the desired pointing and given this, began with the execution of scientific missions. In the case of this project the AOCS system will be only consists of a gravity boom, so the attitude control of this 3U CubeSat will be passive trough the gravity gradient torque. For the simulations that take place in this study, the software MATLAB will be used as a vehicle to analyse the AOCS system. This same software will allow to determine the inertia and other characteristics of the 3U Cubesat, which will be fundamental to the subsequent calculations in order to obtain the gravity boom influence in the spacecraft stabilization. This document will explain the physics behind the spacecraft model, the calculations needed in order to obtain its inertia values and also the equations needed to model the space environment and the forces that are needed for the chosen analysis. Also the algorithms designed in MatLab will be presented in form of Annex, being the calculations for the plots, inertia, angular deviations, ... The results have the goal of determining if the use of the gravity boom is enough to control the attitude of the Cubesat, so diverse configurations for the satellite will be simulated, with variations on the mass of the gravity boom and the length of the cable that links it with the CubeSat body. As it shows in the conclusion section, the configuration where mgb= 1 kg and lcb= 2.5 m seems to meets the requirements of pointing for medium/low accuracy, but if the use of some sensor was to be considered (such as sun sensor or star trackers), missions with the need for a high accuracy system could be feasible as the nadir pointing obtained has a very low angular deviation. However, even though the results for this values are successful, any increase in both variables characterstics lead to the instability of the CubeSat and can not be considered in order to reduce the angular deviation for both yaw and pitch.
SubjectsSatellites, Gravity, Satèl·lits, Gravetat
ProvenancePer motius de propietat intel·lectual, el document original conté altra informació no inclosa en el fitxer de consulta
DegreeGRAU EN ENGINYERIA EN VEHICLES AEROESPACIALS (Pla 2010)
URIhttp://hdl.handle.net/2117/329895
Collections
Share: