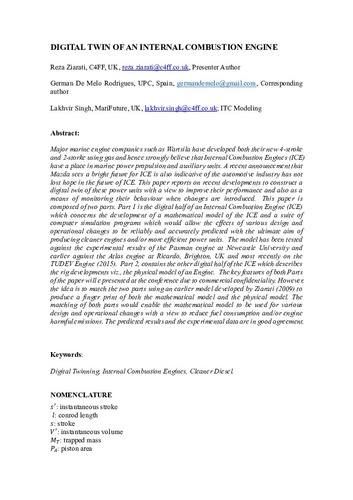 Singh, Lakhvir
Document typeConference report
PublisherUniversitat Politècnica de Catalunya. Departament de Ciència i Enginyeria Nàutiques
Rights accessOpen Access
Abstract
Major marine engine companies such as Wartsila have developed both their new 4-strokeand 2-storke using gas and hence strongly believe that Internal Combustion Engines (ICE) have a place in marine power propulsion and auxiliary units. A recent announcement that Mazda sees a bright future for ICE is also indicative of the automotive industry has not lost hope in the future of ICE. This paper reports on recent developments to construct a digital twin of these power units with a view to improve their performance and also as a means of monitoring their behaviour when changes are introduced. This paper is composed of two parts. Part 1 is the digital half of an Internal Combustion Engine (ICE) which concerns the development of a mathematical model of the ICE and a suite of computer simulation programs which would allow the effects of various design and operational changes to be reliably and accurately predicted with the ultimate aim of producing cleaner engines and/or more efficient power units. The model has been tested against the experimental results of the Paxman engine at Newcastle University and earlier against the Atlas engine at Ricardo, Brighton, UK and most recently on the TUDEV Engine (2015). Part 2, contains the other digital half of the ICE which describes the rig developments viz., the physical model of an Engine. The key features of both Parts of the paper will e presented at the conference due to commercial confidentiality. However, the idea is to match the two parts using an earlier model developed by Ziarati (2009) to produce a finger print of both the mathematical model and the physical model. The matching of both parts would enable the mathematical model to be used for various design and operational changes with a view to reduce fuel consumption and/or engine harmful emissions. The predicted results and the experimental data are in good agreement
CitationZiarat, R.; Melo Rodríguez, G. de; Singh, L. Digital twin of an internal combustion engine. A: Martínez, F.X.;Castells, M.; Martín, M.; Puente, J.M. (eds.). "Maritime Transport VIII : proceedings of the 8th International Conference on Maritime Transport : Technology, Innovation and Research : Maritime Transport'20". Barcelona: Universitat Politècnica de Catalunya. Departament de Ciència i Enginyeria Nàutiques, 2020, p. 215-244. ISBN 978-84-9880-827-8.
URIhttp://hdl.handle.net/2117/329890
ISBN978-84-9880-827-8
Collections
Share: