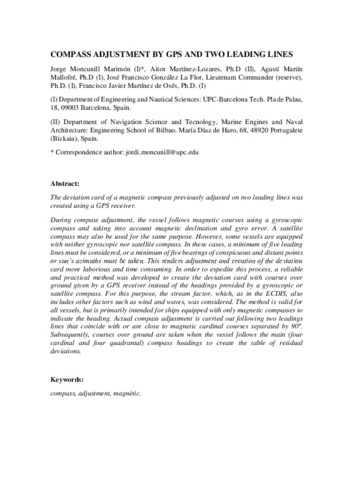 Except where otherwise noted, content on this work is licensed under a Creative Commons license : Attribution-NonCommercial-NoDerivs 3.0 Spain
Abstract
The deviation card of a magnetic compass previously adjusted on two leading lines was created using a GPS receiver.During compass adjustment, the vessel follows magnetic courses using a gyroscopic compass and taking into account magnetic declination and gyro error. A satellite compass may also be used for the same purpose. However, some vessels are equipped with neither gyroscopic nor satellite compass. In these cases, a minimum of five leading lines must be considered, or a minimum of five bearings of conspicuous and distant points or sun’s azimuths must be taken. This renders adjustment and creation of the deviation card more laborious and time consuming. In order to expedite this process, a reliable and practical method was developed to create the deviation card with courses over ground given by a GPS receiver instead of the headings provided by a gyroscopic or satellite compass. For this purpose, the stream factor, which, as in the ECDIS, also includes other factors such as wind and waves, was considered. The method is valid for all vessels, but is primarily intended for ships equipped with only magnetic compasses to indicate the heading. Actual compass adjustment is carried out following two leadings lines that coincide with or are close to magnetic cardinal courses separated by 90º. Subsequently, courses over ground are taken when the vessel follows the main (four cardinal and four quadrantal) compass headings to create the table of residual deviations.
CitationMoncunill Marimon, J. [et al.]. Compass adjustment by gps and two leading lines. A: Martínez, F.X.;Castells, M.; Martín, M.; Puente, J.M. (eds.). "Maritime Transport VIII : proceedings of the 8th International Conference on Maritime Transport : Technology, Innovation and Research : Maritime Transport'20". Barcelona: Universitat Politècnica de Catalunya. Departament de Ciència i Enginyeria Nàutiques, 2020, p. 126-143. ISBN 978-84-9880-827-8.
URIhttp://hdl.handle.net/2117/329879
ISBN978-84-9880-827-8
Collections
Share: