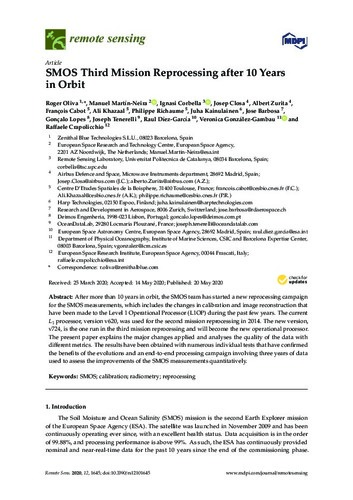 Except where otherwise noted, content on this work is licensed under a Creative Commons license : Attribution-NonCommercial-NoDerivs 3.0 Spain
Abstract
After more than 10 years in orbit, the SMOS team has started a new reprocessing campaign for the SMOS measurements, which includes the changes in calibration and image reconstruction that have been made to the Level 1 Operational Processor (L1OP) during the past few years. The current L1 processor, version v620, was used for the second mission reprocessing in 2014. The new version, v724, is the one run in the third mission reprocessing and will become the new operational processor. The present paper explains the major changes applied and analyses the quality of the data with different metrics. The results have been obtained with numerous individual tests that have confirmed the benefits of the evolutions and an end-to-end processing campaign involving three years of data used to assess the improvements of the SMOS measurements quantitatively
CitationOliva, R. [et al.]. SMOS third mission reprocessing after 10 years in orbit. "Remote sensing", 1 Maig 2020, vol. 12, núm. 10, p. 1645:1-1645:24.
URIhttp://hdl.handle.net/2117/329859
DOI10.3390/rs12101645
ISSN2072-4292
Publisher versionhttps://www.mdpi.com/2072-4292/12/10/1645
Collections
Share: