Identifying muscle synergies from reaching and grasping movements in rats 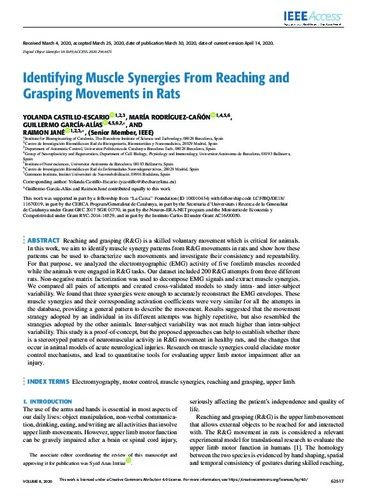 Document typeArticle
PublisherInstitute of Electrical and Electronics Engineers (IEEE)
Rights accessOpen Access
Abstract
Reaching and grasping (R&G) is a skilled voluntary movement which is critical for animals. In this work, we aim to identify muscle synergy patterns from R&G movements in rats and show how these patterns can be used to characterize such movements and investigate their consistency and repeatability. For that purpose, we analyzed the electromyographic (EMG) activity of five forelimb muscles recorded while the animals were engaged in R&G tasks. Our dataset included 200 R&G attempts from three different rats. Non-negative matrix factorization was used to decompose EMG signals and extract muscle synergies. We compared all pairs of attempts and created cross-validated models to study intra- and inter-subject variability. We found that three synergies were enough to accurately reconstruct the EMG envelopes. These muscle synergies and their corresponding activation coefficients were very similar for all the attempts in the database, providing a general pattern to describe the movement. Results suggested that the movement strategy adopted by an individual in its different attempts was highly repetitive, but also resembled the strategies adopted by the other animals. Inter-subject variability was not much higher than intra-subject variability. This study is a proof-of-concept, but the proposed approaches can help to establish whether there is a stereotyped pattern of neuromuscular activity in R&G movement in healthy rats, and the changes that occur in animal models of acute neurological injuries. Research on muscle synergies could elucidate motor control mechanisms, and lead to quantitative tools for evaluating upper limb motor impairment after an injury
CitationCastillo-Escario, Y. [et al.]. Identifying muscle synergies from reaching and grasping movements in rats. "IEEE access", 1 Gener 2020, vol. 8, p. 62517-62530.
URIhttp://hdl.handle.net/2117/329787
DOI10.1109/ACCESS.2020.2984471
ISSN2169-3536
Publisher versionhttps://ieeexplore.ieee.org/document/9050772
Collections
Share: