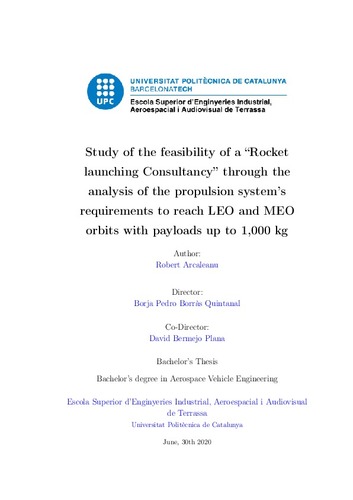 Document typeBachelor thesis
Rights accessOpen Access
Abstract
Since the Soviet Union launched the Sputnik (the first artificial satellite) in 1957, the Space Race became the major priority to both USSR and the US, making it possible to step the Moon in 1969 with the Apollo Missions. It was one of the most ambitious and expensive projects in history, where rockets had a lot of importance, particularly The Saturn V and the Soyuz. Nowadays, rockets are still important for space exploration, from launching Cubesats to LEO to solar system’s exploration. As the Space Race grew, new businesses related to rockets appeared. Within this thesis, it is studied the feasibility of a new business called "Rocket launching Consultancy" through the analysis of the propulsion system’s requirements for different missions. In order to know if there are different optimal rockets for the same mission.
SubjectsBusiness consultants, Rockets (Aeronautics), Consultors d'empreses, Coets (Aeronàutica)
ProvenancePer motius de propietat intel·lectual, el document original conté altra informació no inclosa en el fitxer
URIhttp://hdl.handle.net/2117/329786
Collections
Share: