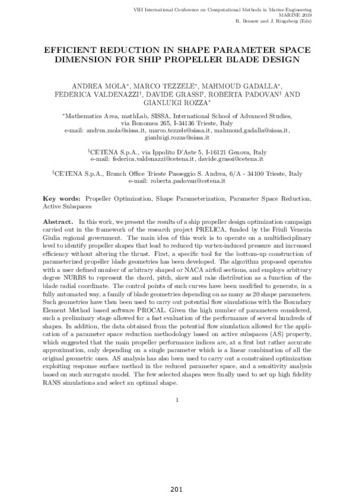 Show full item record
Mola, Andrea
Tezzele, Marco
Gadalla, Mahmoud
Valdenazzi, Federica
Grassi, Davide
Padovan, Roberta
Rozza, Gianluigi
Document typeConference report
PublisherCIMNE
Rights accessOpen Access
All rights reserved. This work is protected by the corresponding intellectual and industrial property rights. Without prejudice to any existing legal exemptions, reproduction, distribution, public communication or transformation of this work are prohibited without permission of the copyright holder
Abstract
In this work, we present the results of a ship propeller design optimization campaign carried out in the framework of the research project PRELICA, funded by the Friuli Venezia Giulia regional government. The main idea of this work is to operate on a multidisciplinary level to identify propeller shapes that lead to reduced tip vortex-induced pressure and increased efficiency without altering the thrust. First, a specific tool for the bottom-up construction of parameterized propeller blade geometries has been developed. The algorithm proposed operates with a user defined number of arbitrary shaped or NACA airfoil sections, and employs arbitrary degree NURBS to represent the chord, pitch, skew and rake distribution as a function of the blade radial coordinate. The control points of such curves have been modified to generate, in a fully automated way, a family of blade geometries depending on as many as 20 shape parameters. Such geometries have then been used to carry out potential flow simulations with the Boundary Element Method based software PROCAL. Given the high number of parameters considered, such a preliminary stage allowed for a fast evaluation of the performance of several hundreds of shapes. In addition, the data obtained from the potential flow simulation allowed for the appli- cation of a parameter space reduction methodology based on active subspaces (AS) property, which suggested that the main propeller performance indices are, at a first but rather accurate approximation, only depending on a single parameter which is a linear combination of all the original geometric ones. AS analysis has also been used to carry out a constrained optimization exploiting response surface method in the reduced parameter space, and a sensitivity analysis based on such surrogate model. The few selected shapes were finally used to set up high fidelity RANS simulations and select an optimal shape.
CitationMola, A. [et al.]. Efficient reduction in shape parameter space dimension for ship propeller blade design. A: MARINE VIII. "MARINE VIII : proceedings of the VIII International Conference on Computational Methods in Marine Engineering". CIMNE, 2019, p. 201-212. ISBN 978-84-949194-3-5.
URIhttp://hdl.handle.net/2117/329640
ISBN978-84-949194-3-5
Collections
Share: