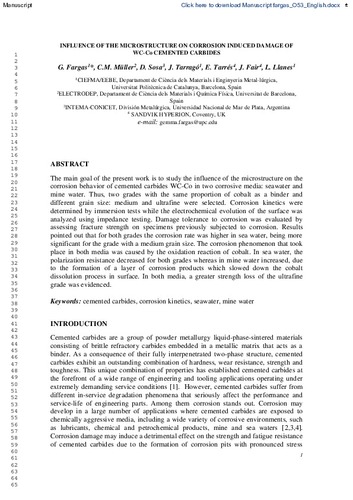 Except where otherwise noted, content on this work is licensed under a Creative Commons license : Attribution-NonCommercial-NoDerivs 3.0 Spain
Abstract
The main goal of the present work is to study the influence of the microstructure on the corrosion behavior of cemented carbides WC-Co in two corrosive media. Corrosion kinetics were determined by immersion tests while the electrochemical evolution of the Surface was analyzed using impedance testing. Damage tolerance to corrosion was evaluated by assessing fracture strength on specimens previously subjected to corrosion. Results pointed out that for both grades the corrosion rate was higher in seawater, being more significant for the grade with a medium grain size. The corrosion phenomenon that took place in both media was caused by the oxidation reaction of cobalt. In seawater, the polarization resistance decreased for both grades whereas in mine water increased, due to the formation of a layer of corrosion products, which slowed down the cobalt dissolution process in Surface. In both media, a greater strength loss of the ultrafine grades was evidenced.
CitationFargas, G. [et al.]. Influence of the microstructure on corrosion induced damage of WC-Co cemented carbides. "Powder metallurgy", 27 Maig 2020, vol. 63, núm. 3, p. 174-179.
URIhttp://hdl.handle.net/2117/329263
DOI10.1080/00325899.2020.1768354
ISSN0032-5899
Publisher versionhttps://www.tandfonline.com/doi/abs/10.1080/00325899.2020.1768354
Collections
Share: