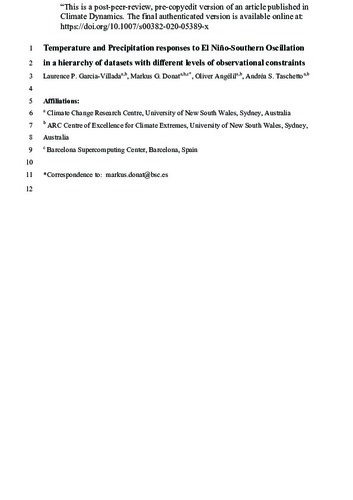 Angélil, Oliver
Taschetto, Andréa S.
Document typeArticle
PublisherSpringer
Rights accessOpen Access
Abstract
El Niño-Southern Oscillation (ENSO) is the dominant mode of climate variability, affecting climate conditions over large areas of the globe. There are, however, substantial differences in how ENSO teleconnections with regional climate variability are represented in different datasets such as gridded observations and climate models. Here we examine the global responses of temperature and precipitation over land to ENSO within a hierarchy of datasets with different levels of observational constraints. Anomaly maps of observed El Niño and La Niña responses are compared to reanalysis, atmospheric models driven by observed sea surface temperature (SST), and coupled atmosphere–ocean general circulation models. There is a gradual decline in anomaly pattern agreement relative to observations moving down the dataset hierarchy to lower observational constraints. We find a positive relationship between the models’ fidelity in representing ENSO temperature and precipitation, though the relationship is stronger for El Niño teleconnections than La Niña. The models also reproduce El Niño response patterns with greater fidelity than La Niña patterns. Additionally, the fidelity of model-simulated responses to El Niño is related to the magnitude of SST variability in the tropical Pacific, but no such relationship could be found for La Niña responses. This comprehensive evaluation highlights the importance of realistically simulating atmospheric circulation and SST variability to better capturing the patterns of regional climate variability in response to ENSO in climate models.
CitationGarcia-Villada, L.P. [et al.]. Temperature and precipitation responses to El Niño-Southern Oscillation in a hierarchy of datasets with different levels of observational constraints. "Climate Dynamics", 2020, vol. 55, núm. 9-10, p. 2351-2376.
URIhttp://hdl.handle.net/2117/329165
DOI10.1007/s00382-020-05389-x
ISSN0930-7575
1432-0894
Publisher versionhttps://link.springer.com/article/10.1007/s00382-020-05389-x
Collections
Share: