“Forma Urbis LAB” and the Morphological Atlas of Portuguese City 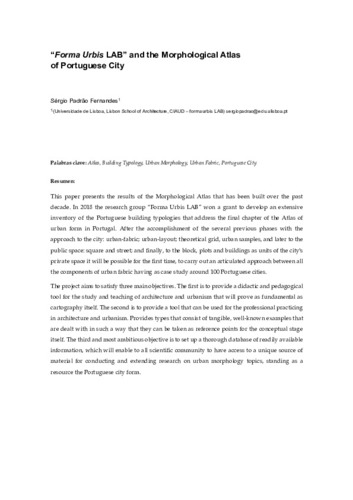 Show full item record
Padrão Fernandes, Sérgio
Document typeConference report
PublisherDUOT, UPC
Rights accessOpen Access
Abstract
This paper presents the results of the Morphological Atlas that has been built over the past decade. In 2018 the research group “Forma Urbis LAB” won a grant to develop an extensive inventory of the Portuguese building typologies that address the final chapter of the Atlas of urban form in Portugal. After the accomplishment of the several previous phases with the approach to the city: urban-fabric; urban-layout; theoretical grid, urban samples, and later to the public space: square and street; and finally, to the block, plots and buildings as units of the city's private space it will be possible for the first time, to carry out an articulated approach between all the components of urban fabric having as case study around 100 Portuguese cities. The project aims to satisfy three main objectives. The first is to provide a didactic and pedagogical tool for the study and teaching of architecture and urbanism that will prove as fundamental as cartography itself. The second is to provide a tool that can be used for the professional practicing in architecture and urbanism. Provides types that consist of tangible, well-known examples that are dealt with in such a way that they can be taken as reference points for the conceptual stage itself. The third and most ambitious objective is to set up a thorough database of readily available information, which will enable to all scientific community to have access to a unique source of material for conducting and extending research on urban morphology topics, standing as a resource the Portuguese city form.
Location
1: R. das Flores de Santa Cruz 2, 1100-129 Lisboa, Portugal
CitationPadrão Fernandes, S. «Forma Urbis LAB» and the Morphological Atlas of Portuguese City. A: Llop, C.; Cervera, M.; Peremiquel, F. (eds.). "IV Congreso ISUF-H: Metrópolis en recomposición: prospectivas proyectuales en el Siglo XXI: Forma urbis y territorios metropolitanos, Barcelona, 28-30 Septiembre 2020". Barcelona: DUOT, UPC, 2020, p. 1-20. ISBN 978-84-9880-841-4.
URIhttp://hdl.handle.net/2117/329138
ISBN978-84-9880-841-4
Collections
Share: