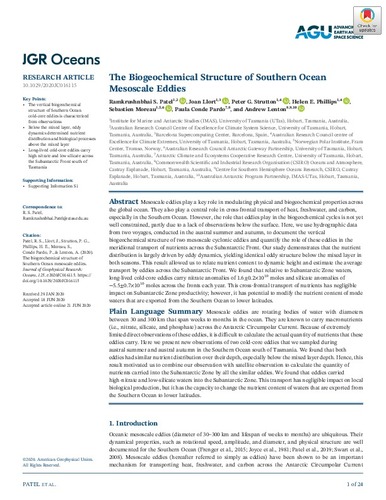 Show full item record
Patel, Ramkrushnbhai S.
Llort, Joan
Strutton, Peter G.
Phillips, Helen E.
Moreau, Sebastien
Conde Pardo, Paula
Lenton, Andrew
Document typeArticle
PublisherWiley
Rights accessOpen Access
Abstract
Mesoscale eddies play a key role in modulating physical and biogeochemical properties across the global ocean. They also play a central role in cross‐frontal transport of heat, freshwater, and carbon, especially in the Southern Ocean. However, the role that eddies play in the biogeochemical cycles is not yet well constrained, partly due to a lack of observations below the surface. Here, we use hydrographic data from two voyages, conducted in the austral summer and autumn, to document the vertical biogeochemical structure of two mesoscale cyclonic eddies and quantify the role of these eddies in the meridional transport of nutrients across the Subantarctic Front. Our study demonstrates that the nutrient distribution is largely driven by eddy dynamics, yielding identical eddy structure below the mixed layer in both seasons. This result allowed us to relate nutrient content to dynamic height and estimate the average transport by eddies across the Subantarctic Front. We found that relative to Subantarctic Zone waters, long‐lived cold‐core eddies carry nitrate anomalies of 1.6±0.2×1010 moles and silicate anomalies of −5.5±0.7×1010 moles across the fronts each year. This cross‐frontal transport of nutrients has negligible impact on Subantarctic Zone productivity; however, it has potential to modify the nutrient content of mode waters that are exported from the Southern Ocean to lower latitudes.
CitationPatel, R.S. [et al.]. The biogeochemical structure of Southern Ocean mesoscale eddies. "Journal of Geophysical Research: Oceans", Agost 2020, vol. 125, núm. 8, e2020JC016115.
URIhttp://hdl.handle.net/2117/329080
DOI10.1029/2020JC016115
ISSN2169-9291
Publisher versionhttps://agupubs.onlinelibrary.wiley.com/doi/abs/10.1029/2020JC016115
Collections
Share: