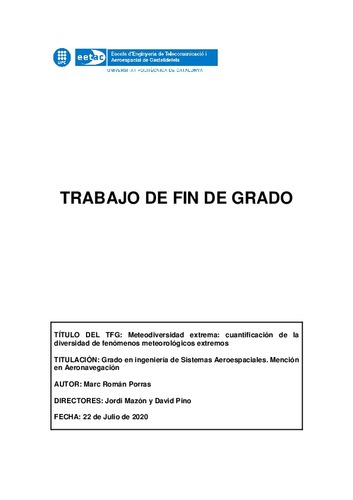 Document typeBachelor thesis
Rights accessOpen Access
Abstract
The concept of meteodiversity is used to determine and characterize the variety of meteorological phenomena in a region during a given period. Specifically, using the Meteodiversity Index (MI), we can quantify the climatic variability based on a set of variables which measures the occurrence of a series of meteorological phenomena. The present work aims to obtain the geographical distribution of MI along Spain (without Canary Islands, Ceuta and Melilla) throughout the period 1981-2010 and considering two different types of variables: average variables and extreme variables. The extreme variables endow our analysis with greater precision and rigor by evaluating phenomena that are distant from the average values. The results take into account the characteristic climatic situations on a synoptic scale for each seasonal period, the specific distributions of each variable considered in meteodiversity computation and the Köppen climate classification. The geographical distribution of MI will be used to characterize the aeronautical sector most conflictive areas, throughout the study territory, in terms of meteorological diversity. Furthermore, in A Coruña, Adolfo Suarez Madrid-Barajas, Bilbao and Josep Tarradellas Barcelona-El Prat airports, the influence of MI variables is studied in order to see if they adjusts with the climatic situations exposed in the aerodrome meteorological guides, arranged by AEMET only for these airports. All the previous topics are collected throughout the project and analysed obtaining the pertinent considerations regarding our study, its limitations and future work inside the field of meteorological diversity.
SubjectsMeteorology in aeronautics, Meteorologia en l'aeronàutica
URIhttp://hdl.handle.net/2117/328914
Collections
Share: