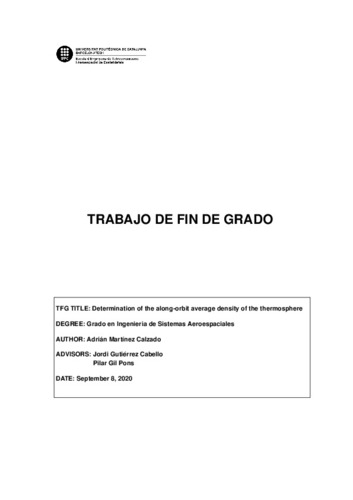 Document typeBachelor thesis
Rights accessOpen Access
Abstract
Nowadays, the study of the dynamics of the upper atmosphere has become a must in order to study satellite trajectories at low orbit with accuracy. The region we are interested in this project is the lower part of the thermosphere (between 100 and 300 km) where the atmosphere density begins to be considerably important. There are several atmosphere models which forecast the physical conditions at that altitudes. However, these models have a considerable error when they compute the density (usually between 15-20%). Due to that, a group of researchers at UPC aims to reduce these errors between the forecast and real values. Within this research, this project aims to study the average density along-orbit that satellites may encounter at ionospheric altitudes using two different atmospheric models (NRLMSISE-00 and JB2008) and check if we can obtain the density with relative accuracy in case of a problem with the satellites. To achieve that, we have developed a code in MATLAB based on the Simplified General Perturbation 4 (SGP4) orbit propagator in which we compute the drag perturbation on our own using an atmospheric model. This, nevertheless, introduces an important factor to consider and study, which is the determination of the ballistic coefficient. Once we developed and test the code, we chose two different satellites to simulate their trajectories and make the study: a 1U CubeSat (ArduSat-X) and a spherical satellite (STARSHINE-2). Both satellites were in different situations in terms of solar activity which allowed us to study the problem in different conditions. Apart from that, as STARSHINE-2 is spherical, it allowed us to determine how important is to consider the ballistic coefficient with accuracy. The results have been against what we expected to get and were a bit surprising for us. The main conclusion we got is that the errors from the atmospheric models are bigger than what we read in any bibliography. We get values around 40-50% of error with STARSHINE-2, which shows us that the lower thermosphere is less known that we expected, putting in value the necessity of doing further research. Furthermore, we realised the importance of being precise with the ballistic coefficient because could introduce more error when we propagate the trajectory, making difficult deriving the density and so know its real value. Unfortunately, nowadays we cannot be precise with the ballistic coefficient with satellites that are not spherical due to the uncertainties when we determine the area. That makes spherical satellites perfect to study this part of the atmosphere.
SubjectsArtificial satellites--Attitude control systems, Satèl·lits artificials
URIhttp://hdl.handle.net/2117/328862
Collections
Share: