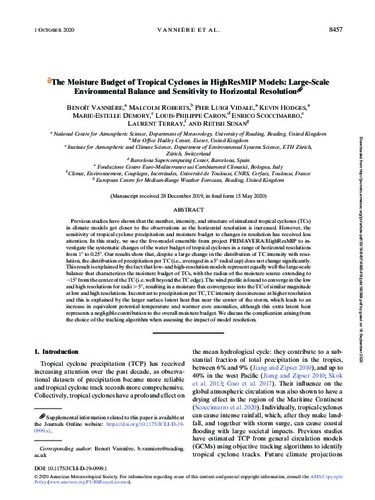 Scoccimarro, Enrico
Terray, Laurent
Senan, Retish
Document typeArticle
PublisherAmerican Meteorological Society
Rights accessOpen Access
All rights reserved. This work is protected by the corresponding intellectual and industrial property rights. Without prejudice to any existing legal exemptions, reproduction, distribution, public communication or transformation of this work are prohibited without permission of the copyright holder
ProjectPRIMAVERA - PRocess-based climate sIMulation: AdVances in high resolution modelling and European climate Risk Assessment (EC-H2020-641727)
Abstract
Previous studies have shown that the number, intensity, and structure of simulated tropical cyclones (TCs) in climate models get closer to the observations as the horizontal resolution is increased. However, the sensitivity of tropical cyclone precipitation and moisture budget to changes in resolution has received less attention. In this study, we use the five-model ensemble from project PRIMAVERA/HighResMIP to investigate the systematic changes of the water budget of tropical cyclones in a range of horizontal resolutions from 1° to 0.25°. Our results show that, despite a large change in the distribution of TC intensity with resolution, the distribution of precipitation per TC (i.e., averaged in a 5° radial cap) does not change significantly. This result is explained by the fact that low- and high-resolution models represent equally well the large-scale balance that characterizes the moisture budget of TCs, with the radius of the moisture source extending to ~15° from the center of the TC (i.e. well beyond the TC edge). The wind profile is found to converge in the low and high resolutions for radii > 5°, resulting in a moisture flux convergence into the TC of similar magnitude at low and high resolutions. In contrast to precipitation per TC, TC intensity does increase at higher resolution and this is explained by the larger surface latent heat flux near the center of the storm, which leads to an increase in equivalent potential temperature and warmer core anomalies, although this extra latent heat represents a negligible contribution to the overall moisture budget. We discuss the complication arising from the choice of the tracking algorithm when assessing the impact of model resolution.
Related documenthttps://doi.org/10.1175/JCLI-D-19-0999.s1.
CitationVannière, B. [et al.]. The moisture budget of tropical cyclones in HighResMIP models: large-scale environmental balance and sensitivity to horizontal resolution. "Journal Of Climate", 1 Octubre 2020, vol. 33, núm. 19, p. 8457-8474.
URIhttp://hdl.handle.net/2117/328791
DOI10.1175/JCLI-D-19-0999.1.
ISSN0894-8755
1520-0442
Publisher versionhttps://journals.ametsoc.org/jcli/article/33/19/8457/354274/The-Moisture-Budget-of-Tropical-Cyclones-in
Collections
Share: