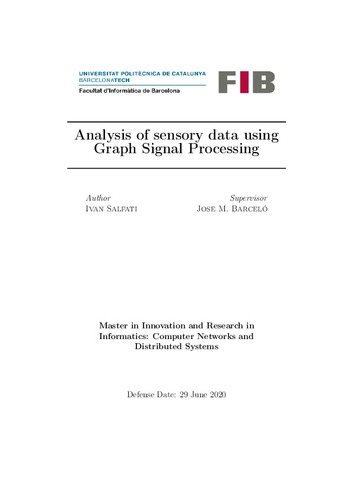 Document typeMaster thesis
Rights accessOpen Access
Abstract
Air pollution monitoring is an important topic that has been researched in the past few years thanks to the massive deployment of IoT platforms, as it affects the lives of both children and adults, and it kills millions of people worldwide every year. A new framework of tools called Graph Signal Processing was presented recently and it allows, among other things, the ability to predict data on a node that belongs to a network of sensors using both the data itself and the topology of the graph, which is based on the Laplacian matrix. This thesis is a comparative study on different prediction techniques for pollutant signals, such as Linear Combination, Multiple Linear Regression and GSP and it presents the results of all three methods in different scenarios, using RMSE and R2 indicators, and focusing the efforts on the understanding of how different parameters (such as the distance between nodes) affect the performances of these new tools. The results of the study show that pollutants O3 and NO2 are lowpass signals, and as the number of edges between nodes increases, GSP obtains a close performances to MRL. For PM10, we conclude that is not a low-pass signal, and the performance of the indicators drop massively compared with the previous ones. Linear combination is the worst of all three and MLR has a stable performance during all the scenarios.
SubjectsSignal processing, Sensor networks, Tractament del senyal, Xarxes de sensors
URIhttp://hdl.handle.net/2117/328692
Collections
Share: