Patterns and impacts of nonvertical evolution in eukaryotes: a paradigm shift 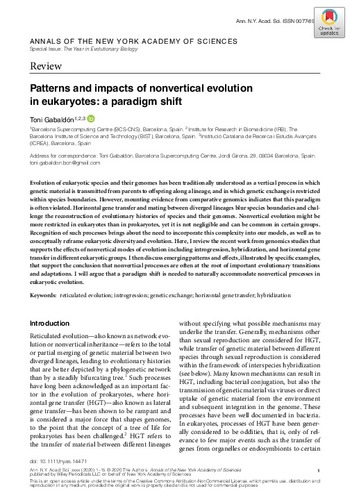 Show full item record
Gabaldon, Toni
Document typeArticle
PublisherWiley
Rights accessOpen Access
European Commission's projectRETVOLUTION - Reticulate evolution: patterns and impacts of non-vertical inheritance in eukaryotic genomes. (EC-H2020-724173)
MULTI_FOLDS - Not one but many: adopting structural flexibility in the analysis of the evolution of lncRNAs. (EC-H2020-793699)
Abstract
Abstract Evolution of eukaryotic species and their genomes has been traditionally understood as a vertical process in which genetic material is transmitted from parents to offspring along a lineage, and in which genetic exchange is restricted within species boundaries. However, mounting evidence from comparative genomics indicates that this paradigm is often violated. Horizontal gene transfer and mating between diverged lineages blur species boundaries and challenge the reconstruction of evolutionary histories of species and their genomes. Nonvertical evolution might be more restricted in eukaryotes than in prokaryotes, yet it is not negligible and can be common in certain groups. Recognition of such processes brings about the need to incorporate this complexity into our models, as well as to conceptually reframe eukaryotic diversity and evolution. Here, I review the recent work from genomics studies that supports the effects of nonvertical modes of evolution including introgression, hybridization, and horizontal gene transfer in different eukaryotic groups. I then discuss emerging patterns and effects, illustrated by specific examples, that support the conclusion that nonvertical processes are often at the root of important evolutionary transitions and adaptations. I will argue that a paradigm shift is needed to naturally accommodate nonvertical processes in eukaryotic evolution.
CitationGabaldon, T. Patterns and impacts of nonvertical evolution in eukaryotes: a paradigm shift. "Annals of the New York Academy of Sciences", 2020,
URIhttp://hdl.handle.net/2117/328675
DOI10.1111/nyas.14471
ISSN0077-8923
Publisher versionhttps://nyaspubs.onlinelibrary.wiley.com/doi/full/10.1111/nyas.14471
Collections
Share: