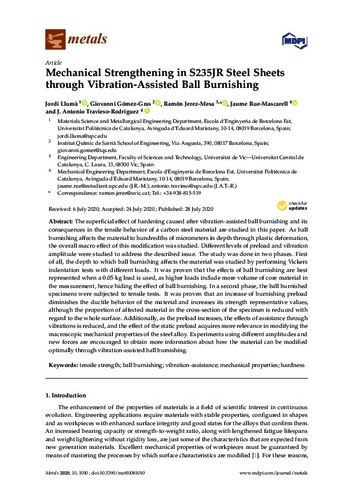 Document typeArticle
PublisherMultidisciplinary Digital Publishing Institute (MDPI)
Rights accessOpen Access
Abstract
The superficial effect of hardening caused after vibration-assisted ball burnishing and its consequences in the tensile behavior of a carbon steel material are studied in this paper. As ball burnishing affects the material to hundredths of micrometers in depth through plastic deformation, the overall macro effect of this modification was studied. Different levels of preload and vibration amplitude were studied to address the described issue. The study was done in two phases. First of all, the depth to which ball burnishing affects the material was studied by performing Vickers indentation tests with different loads. It was proven that the effects of ball burnishing are best represented when a 0.05 kg load is used, as higher loads include more volume of core material in the measurement, hence hiding the effect of ball burnishing. In a second phase, the ball burnished specimens were subjected to tensile tests. It was proven that an increase of burnishing preload diminishes the ductile behavior of the material and increases its strength representative values, although the proportion of affected material in the cross-section of the specimen is reduced with regard to the whole surface. Additionally, as the preload increases, the effects of assistance through vibrations is reduced, and the effect of the static preload acquires more relevance in modifying the macroscopic mechanical properties of the steel alloy. Experiments using different amplitudes and new forces are encouraged to obtain more information about how the material can be modified optimally through vibration-assisted ball burnishing.
CitationLluma, J. [et al.]. Mechanical strengthening in S235JR steel sheets through vibration-assisted ball burnishing. "Metals", 28 Juliol 2020, vol. 10, p. 1010.
URIhttp://hdl.handle.net/2117/328673
DOI10.3390/met10081010
ISSN2075-4701
Publisher versionhttps://www.mdpi.com/2075-4701/10/8/1010
Collections
Share: